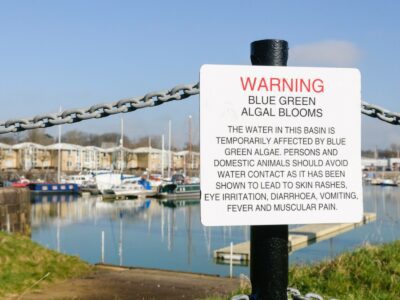 Algae and global warming might be connected, according to researchers. Harmful blooms of toxin-producing algae harm the environment, wildlife, pets, and people. They occur in both freshwater bodies and oceans.

What is a Harmful Algal Bloom?

Algae are very simple plants that form the base of aquatic food webs. They grow in water and photosynthesize like other plants. Under certain conditions, algae grow rapidly, forming large blooms.

Some algal blooms are harmful because they produce toxic substances. The toxins move through the food chain, harming all kinds of animals, from plankton to large fish and marine mammals and birds. A bloom can occur in the ocean and in lakes.

The toxins from the bloom harm people too through contaminated fish and shellfish and drinking water. Harmful blooms impact recreation and local fishing economies. Even non-toxic blooms can be harmful because they use up all the oxygen in the water, suffocating fish.

Nutrients are necessary, but blooms also need other elements: sunlight, slow-moving water, and warm temperatures. Algal bloom causes also seem to include extreme weather events. They often coincide with a bloom, possibly because the result in more runoff of nutrients into the water.

For algae, global warming might be a boon. Climate change is increasing air and water temperatures and triggering more extreme weather, all elements that coincide with harmful algal blooms.

Studies of ocean algal blooms conducted by the University of Southern California Sea Grant found that global warming conditions increase both the frequency and toxicity of blooms. In addition to warmer water in the oceans, increasing acidity seems to be making blooms more toxic. Climate change increases carbon dioxide levels in the oceans, which makes the water more acidic.

The same study found that the same global warming factors increase blooms in freshwater, but other studies have found different results. A University of Wisconsin study of over 300 freshwater bodies found no trends in algal bloom frequency over a decade of measurements in most lakes.

The study did find that blooms worsened in lakes that already had a lot of algal blooms when they experienced extreme weather events. When they went through periods of calm weather, the algae problems decreased. It also found that lakes that underwent conservation efforts had fewer blooms over the years.

While some of the results are mixed, overall, it seems that changes in climate will have negative impacts on harmful algal blooms.