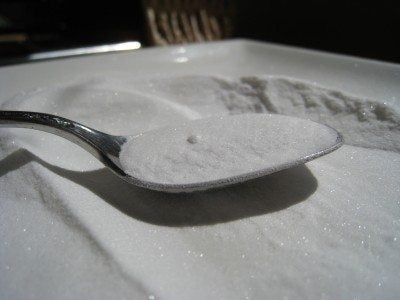 Baking soda, or sodium bicarbonate, has been touted as an effective and safe fungicide on the treatment of powdery mildew and several other fungal diseases.

Is baking soda good for plants? It certainly doesn’t seem to do any harm, but it isn’t the miracle cure for those mildew beleaguered roses either. Baking soda as a fungicide does appear to diminish the effects of fungal diseases on common ornamental and vegetable plants. Recent studies confuse the efficiency of using this common household item. The compound seems to prevent some fungal spore flare ups but doesn’t kill the spores.

Numerous trials have been done to study the effects of baking soda sprays on plants. The ATTRA organization, which assists rural and agricultural growers with common production issues and plant information, published a series of findings from trials across the globe. Overall, baking soda on plants had a beneficial effect in reducing fungal spores.

Some concerns, however, were raised over sodium bicarbonate in gardens because of the first part of the compound. Sodium can burn leaves, roots, and other plant parts. It can also stay in soil and affect later plants. No serious buildup was found though, and the Federal EPA has cleared sodium bicarbonate as safe for edible plants.

The best concentration of baking soda is a one percent solution. The remainder of the solution can be water, but coverage on the leaves and stems is better if some horticultural oil or soap is added to the mixture.

Sodium bicarbonate as a fungicide works by disrupting the ion balance in the fungal cells, which causes them to collapse. The biggest danger in using sodium bicarbonate on plants is the potential for foliar burn. This appears as brown or yellow patches at the end of the leaves and can be minimized by thorough dilution of the product.

Is Baking Soda Good for Plants?

Baking soda on plants causes no apparent harm and may help prevent the bloom of fungal spores in some cases. It is most effective on fruits and vegetables off the vine or stem, but regular applications during the spring can minimize diseases such as powdery mildew and other foliar diseases.

A solution of 1 teaspoon (5 ml.) baking soda to 1 gallon a (4 L.) of water reduces instances of leaf burn. Add 1 teaspoon (5 ml.) dormant oil and ½ teaspoon (2.5 ml.) of dish soap or horticultural soap as a surfactant to help the mixture stick. Keep in mind the solution is water soluble, so apply on a dry cloudy day for best results.

While some trials and scientific research mitigate the effectiveness of baking soda against fungal diseases, it won’t hurt the plant and does have short term benefits, so go for it!

BEFORE USING ANY HOMEMADE MIX: It should be noted that anytime you use a home mix, you should always test it out on a small portion of the plant first to make sure that it will not harm the plant. Also, avoid using any bleach-based soaps or detergents on plants since this can be harmful to them. In addition, it is important that a home mixture never be applied to any plant on a hot or brightly sunny day, as this will quickly lead to burning of the plant and its ultimate demise.