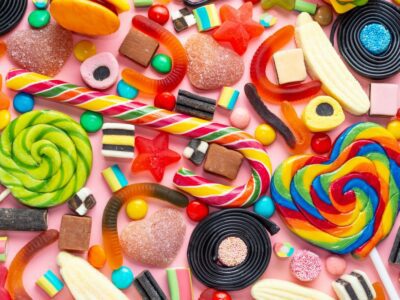 Candy has been a treat enjoyed for centuries. Ancient Egyptians, Greeks, and Asian societies used fruits and nuts combined with honey to make sweet confections. The Incan and Mayan civilizations enjoyed chocolate, while many of our ancestors ate a hard candy made from boiled barley. Sugary treats have been a complement to our diets for generations, with the word candy derived in the early 13th century. Most of these sweets were plant based candy, easy recipes to produce today in the garden.

Refined sugar has been shown to have some serious unhealthful effects on our bodies, but that doesn’t stop us from craving sweets. Early candies were made from common plants of the region. The licorice root plant started a craze over anise flavored goodies, while the marshmallow root provides us with one of the basics necessary for a s’more. Cinnamon flavor is from tree bark, ginger is a root, and vanilla stems from a bean. Many more of today’s candies have their roots in roots, leaves, berries, and other plant parts.

A perennial legume, Glycyrrhiza glabra, is the source of licorice root. Licorice root plant is native to Europe and some regions of Asia. A syrup is made from boiling the root and condensing the liquid. The result is used as a spice and seasons sauces. It contains glycyrrhizin, which is 50 times sweeter than sucrose. The syrup flavors the candy named after the root, licorice. It is also chewed raw as a mouth freshener. The earthy flavor also puts off an aroma similar to anise.

Marshmallow root comes from the mallow plant. It is a common marsh plant with mucilaginous properties. The puffed sweet made from the root has been enjoyed since at least 2000 B.C., when Egyptians used marshmallows as a treat for gods and royalty. Today it is a classic topper to cocoa and part of our camping favorite, s’mores.

Maple trees are still tapped to harvest their sap. This is boiled down into a sweet syrup for topping waffles, pancakes, and more. It can also be made into hard candy, a treat for children for centuries. Pine sap was used in similar manners, and the sap of the Tamarisk tree flavors a candy made with pistachios, almonds, and chocolate. The chicle tree started a craze in gum chewing. Many of our original chewing gums were made using the chewy sap of the chicle tree. Few of today’s chewing gum brands use chicle, instead preferring a synthetic gum base.

Fruit and Nut Based Treats

One of the earliest candies was made using fruits and nuts, and occasionally edible flowers and herbs. An ancient nearly 4,000 year old treat, cocoa, comes from the cacao tree. The cacao tree was revered as a “food of the gods,” an accurate translation of its genus, Theobroma. The plant produces large pods with white seeds. These seeds are fermented until they develop a dark brown hue. The beans are then dried and roasted and finally ground into paste. The paste is the base for our dearly beloved chocolate and flavors both sweet and savory dishes.