How To Make A Shrub From Homegrown Fruit And Herbs 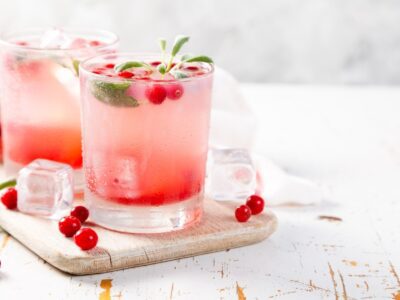 As the saying goes, “everything old is new again.” For centuries vinegar has been added to water and other liquids. For sailors it likely helped prevent scurvy, and in other cases, it added flavor. Today there is a trend for vinegar laced liquids, which are called shrubs. What is a shrub? A vinegar shrub is the basis for a tangy beverage drunk on its own or part of a cocktail. A basic shrub cocktail can be whisked together easily with common kitchen items.

Studies have shown that sour beverages are more thirst quenching because they stimulate the salivary glands. This probably explains why shrubs have been around for such a long time. Around the 1700s the drink made its way to the U.S. and was made with common sweeteners like maple syrup or honey, ginger or other spices, and diluted with water. This “hay maker’s punch” was served during harvest season to workers in orchards and the fields. Today, a shrub drink has become a cosmopolitan offering in many trendy restaurants and bars.

What is a Shrub?

A shrub is a drinking vinegar, often with fruit or juice added, and herbs or spices. They can be customized by varying the amount of sweetness, fruitiness, and even by using different vinegars. The name shrub comes from the Arabic word “sharbah,” which means “drink.” Such beverages can be traced back to 4,000 years ago in Babylonian records. Early shrubs were comprised of citrus, fruit, sugar, and simple vinegar. Later on spirits such as rum or brandy became part of the recipe. The beverage is very versatile and usually relied upon fruits in season, although dried fruits were also sometimes added. Shrubs were often quaffed during wartimes, on long voyages, and treks. They were useful when fresh, potable water was scarce.

Every type of vinegar has a different flavor profile. So using certain vinegars can direct changes in a shrubs flavor. The gentle champagne vinegar will just add a kiss of acid, while a white vinegar will add some serious punch. Almost any variety of vinegar can be used in a shrub, each creating a tailor made beverage with different notes of flavor. A wine vinegar like red wine vinegar brings in subtle fruity tones, while balsamic vinegar blends sweetness and pungency. Today’s shrubs may be mixed with water, fruit juice, or alcohol. Fine dining establishments sell shrubs on their beverage menus, often with fancy garnishes such as fruit or herbs. Shrubs can also be found at high end grocery stores, bottled and ready to drink.

Shrubs may be made by using a cold or hot method. The cold method combines crushed fruit with sugar to macerate for 24 hours or up to three days. Then the liquid is strained and vinegar is added. In the hot method, the fruit is cooked with sugar and a bit of water or lemon juice. After cooling it is strained and vinegar is added. To serve your shrub, add carbonated water or spirits.