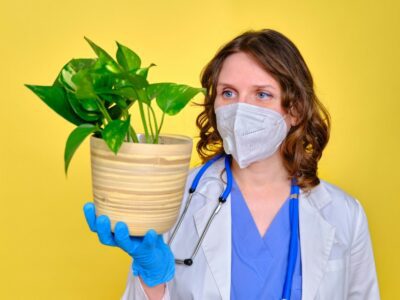 Have you ever wondered about the plant immune system? If plants can’t move and get away from pathogens like animals can, how do they fight disease? The answer is a combination of strategies that recognize microbes, compartmentalize infection, boost immunity, and increase disease resistance.

Do Plants Have Immune Systems?

Plants do have an immune system that both differs from and is similar to the human immune system. Both can fight off an infection and have similar signaling pathways and related compounds, but plants use different mechanisms.

Plant immunity is not adaptive like human immune systems. It doesn’t remember specific pathogens in order to mount a targeted defense the next time around. Instead, it deploys more general strategies for fighting off pathogens. Both plants and animals have mechanisms for recognizing and acting against the proteins that pathogens release into host cells.

The immune response in plants is varied but also generalized. Researchers have found several strategies plants use to mount a defense in the phase of disease:

Immunity in plants is a fascinating topic that scientists are understanding better every day. It’s important for fighting disease in crops in particular, but much of plant immunity remains a mystery.