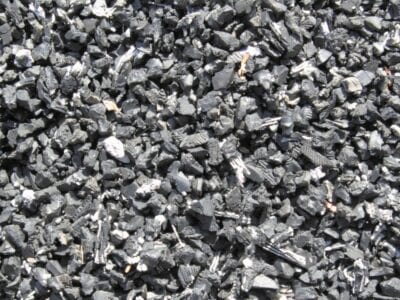 Laying mulch down in the garden accomplishes multiple tasks; it retards weeds, retains moisture and beautifies the landscape to name a few. A more recent option is rubber mulch for gardens. As with anything new, questions began to arise about rubber mulch and plants, like “is rubber mulch safe?” This is the foremost concern. The effects of rubber mulch in soil are somewhat contested and, at the very least, the information does not lead one to a definitive answer that rubber mulch is bad, nor that it is beneficial.

What is Rubber Mulch for Gardens?

Any car owner knows that at one time or other the vehicle will need new tires. Add up new tires for the world’s population in a year and you end up with over one billion end-of-life tires. What to do with all those used tires has been an ongoing debate for decades.

Today more attempts are being made to reuse the rubber from the tires, which on the surface seems like a great idea. Rubber mulch is one such byproduct made from recycling rubber tires.

Rubber mulch for gardens and playgrounds is derived from either waste tire buffings or nuggets of synthetic rubber. Nuggets come from tires ground up after their steel bands have been removed. Buffings come from worn down tread after it is removed from the tire before retreading.

The resulting rubber mulch is then often dyed in a rainbow of hues and sold as rubber mulch for gardens or for playgrounds or sports facilities.

The question of whether rubber mulch is bad is a difficult one to answer and is most certainly a polarizing one. On the one hand, isn’t the idea of repurposing tires a good one? We are often encouraged to reuse, repurpose and recycle to save our planet.

On the surface, the idea of grinding tires up to repurpose as mulch sounds wonderful. Rubber mulch is touted to have several benefits over wood mulch as well. Rubber mulch is said to be permanent, slows weeds and fungal disease, doesn’t run off with irrigation or heavy rains, and is an environmentally friendly option.

From the benefits listed, rubber mulch doesn’t seem all that bad, or is it?

In order to attempt to answer the question you need to break down some of the pros of rubber mulch in gardens. First of all, rubber mulch is not permanent. It may take a bit more time than wood mulch to break down, but it is not immune to the ravages of weather, bacteria, fungi and insects; and yes, rubber mulch does provide habitat for insects.

As rubber mulch breaks down it leaches other chemicals, primarily heavy metals such as aluminum, cadmium, chromium, molybdenum, selenium and zinc. It also leaches 2-Mercaptobenzothiazole (MBT) and polyaromatic hydrocarbons (PAHs) which are shown have detrimental effects on human health as well as the environment.

That said, the fact is that the use of rubber mulch is unregulated by the EPA, meaning that its use is regulated by local and state authorities. This also means that the product has not been intensively studied, so there is no definitive consensus on whether rubber mulch is safe for plants or people for that matter.

A few states have published studies done on the use of rubber in artificial turf fields and the only conclusion so far is that further study is needed. At this writing, no one has done research on the relationship between the use of rubber mulch and plants such as fruits and vegetables to see if there is any affect on crops.

What has been studied is zinc in soil. Zinc is naturally occurring in soil but as with almost anything, too much of a good thing can become bad. Some regions have sufficient or even surfeit levels of zinc in the soil, which means that if rubber mulch is leaching additional zinc into the soil, plants will be affected.

Also, heavy metals are more available for plant uptake in acidic soils, which means they are more likely to be found in fruits and vegetables grown in an area covered in rubber mulch. These leached heavy metals along with other chemicals can also find their way into aquatic ecosystems, killing or damaging fish and aquatic plants.

In the end, the decision to use rubber mulch in the garden is up to the consumer. Hopefully down the road soon, scientists will have a better grasp on what or if rubber mulch presents safety concerns, but in the meantime it is up to us to educate ourselves and make as much of an informed decision as possible.