Deck The Halls: History Of Evergreens In The Home And Decorating Tips

Gardening Projects
By: Becca Badgett, Co-author of How to Grow an EMERGENCY Garden
Printer Friendly Version 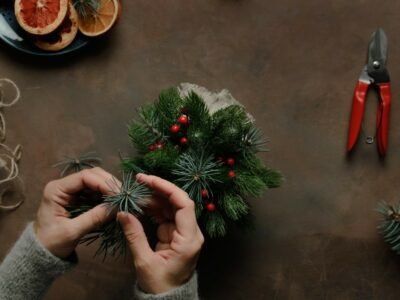 In the history of holiday decorations, live evergreen trees are some of the most commonly used in various ways. Both Christians and pagans have used them in some form for thousands of years. The first live Christmas trees were displayed centuries ago in Northern Europe. Some people there even planted and grew them in boxes indoors.

Romans of long ago used fir trees and live branches as decoration for the New Year. They believed hanging boughs of greenery protected them from evil spirits and demons. Many also used holly for indoor decorations. The first person known to bring a Christmas tree inside in Germany was the 16th century preacher, Martin Luther.

Christians believed evergreens were a “sign of everlasting life with God.” Trees were decorated for a time with fresh fruit, pretzels and paper flowers. Possibly, the children were allowed to help back then with making decorations, as they sometimes do today.

Many other instances of using live greenery in centuries past are cited, as we find the tradition still popular today. As we prepare for this year’s holiday season and decorate our own homes with greenery, we may use it in any number of ways.

Wreaths and Christmas trees are among the best known ways we use the live Christmas evergreen decorations. We may also use greenery on the mantle, nearby tables and on the walls. While wreaths normally go on an outside door, they can also hang in front of windows inside or on the wall.

Christmas trees are often located in a home’s living area, whether that’s a family or living room. Some like to stage an area of decoration in other parts of the home. It is not unusual these days to have more than one decorated tree.

In the United States, the use of fresh greenery and Christmas garland history started in the South during colonial times and later moved to northern states. Southern churches first displayed elaborate garlands for the holiday, according to available information. These were made with various greenery, such as holly, ivy and mountain laurel. The mistletoe tradition started around this same time.

Include Live Herbs for Fragrance

Various herbs and rose petals were used to add fragrance to the garland displays. We can add branches of herbs today for the same effect. You can easily start rosemary and lavender in the summer that will have good sized branches by the time you make garlands and other evergreen displays at Thanksgiving and later.

Or you can purchase growing herbs with fragrance to use in this year’s arrangements, although it is more cost effective to grow your own. Just pinch the strands of herbs once in awhile to release more of the great smell.

Now that you’ve learned some of the Christmas history and traditions of using live evergreens to decorate for the holidays, get started on your home. If you’re not sure how you’ll like it, just start with an evergreen wreath or a live tree. You’ll feel good about replacing the artificial with the real thing.