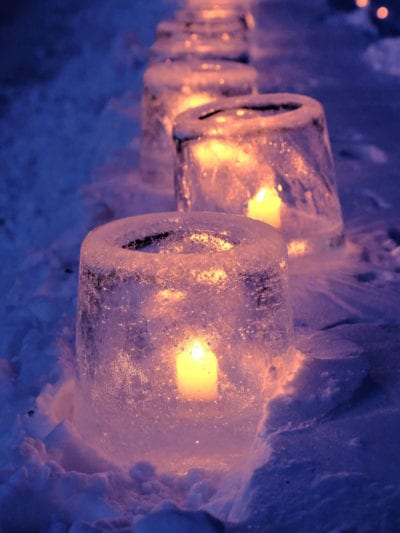 Winter is around the corner and while gardeners may mourn the loss of the growing season, garden crafts can brighten the night. This year try making homemade ice luminaries to decorate and light up porches, decks, garden beds, and walkways. It’s a simple, festive way to make the most of the cold season.

What are Garden Ice Luminaries?

Think of these as ice lanterns. A luminary is traditionally a paper lantern, often simply a candle set in a paper bag. The most common use of luminaries is to celebrate Christmas. Many people, and often entire towns or neighborhoods, set out lines of luminaries on one night, such as Christmas Eve.

The tradition is thought to have begun in New Mexico, but it has spread throughout the U.S. Some people now use luminaries to decorate for other holidays, like Halloween, or throughout the winter.

How to Make Ice Luminaries

Ice luminaries DIY projects are easier than you think, and the results are spectacular. A paper bag luminary is traditional and easy, but an ice lantern adds an extra special glow. You can even use plants from your garden to decorate them. Follow these steps to make an ice luminary and use your own creative ideas along the way: