Share A Wassail Drink With Your Apple Tree This Holiday 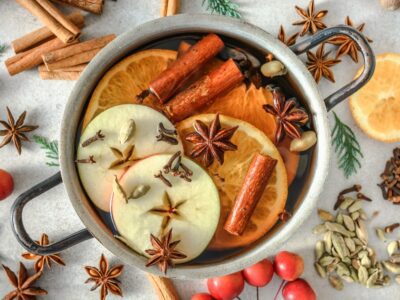 Caroling is one of our cherished holiday traditions. An old fashioned holiday song is “Here We Come a Wassailing,” a classic from years ago. It probably isn’t the most popular song today, but it once referred to another old tradition, drinking wassail punch. What is wassail? Christmas wassail is a warm spiced cider, perfect for stoking a nice gentle heat in the belly on cold nights.

Wassailing referred to the delightful practice of downing some warm cider, usually prior to setting off caroling in the winter cold. It was most common in regions where cider apples grew, due to the availability of the beverage’s key ingredient. It all started well before Christmas existed and was a part of the Yuletide celebration, which fell around January 5th or 6th.

A traditional wassail recipe featured mulled ale, curdled cream, roasted apples, eggs, cloves, ginger, nutmeg, and sugar. Drinks that featured these type of spices were reserved for special occasions. This is because spices were expensive and came from far away. The drink is named for the Anglo Saxon phrase ‘waes hael,’ which means “good health.” The beverage was served in large bowls, often made of wood, but occasionally pewter, silver, or porcelain. The Twelfth Night tradition saw the bowls filled with the wassail and topped with roasted apples or pears. Revelers would travel to nearby orchards and make a ruckus, apparently to scare away evil spirits. They were also there to celebrate the orchard owner and the trees themselves. The wassail bowl would be passed around and the trees would receive a draught directly to their roots in thanks. Sometimes cakes or bread soaked in wassail were placed directly into the tree branches. Amidst this chaos were also chants for the trees to wake up and begin producing anew.

Original wassail recipes included egg. The egg addition resulted in a frothed beverage. Traditional recipes started with spiced wine or ale, but brandy is a worthy substitute.
You will need:

Roast the apples with brown sugar until lightly caramelized. Mix the liquids in a sauce pan and add the spices wrapped in cheesecloth. Warm gently. Beat the egg yolks until frothy and in a separate bowl beat whites until they form stiff peaks. Add the yolks to the whites and fold in slowly. Remove the cheesecloth containing the herbs. Take a cup full of warm wassail and slowly whisk it into the egg mixture. Then add the tempered eggs to the wassail. Garnish with the apples.

Today we frown upon serving young people alcohol, but our ancestors didn’t have such qualms. Today’s recipes are likely to eschew wine or brandy entirely and use spiced fruit juices as the base. You simply simmer 4 parts apple juice to 2 parts orange or cranberry juice. A bit of lemon juice and a similar amount of whole spices as listed above. Sweeten with brown sugar if necessary. Serve with roasted apple slices and a dash of nutmeg. A dollop of fresh whipped cream will really make the beverage special. This is a family friendly version of wassail that will still warm the belly and bring the scents and flavors of autumn into the winter home.

Printer Friendly Version
Read more about Gardening Projects
<Previous
Did you find this helpful? Share it with your friends!
FacebookTweetPinEmail
Related Articles
Newest Articles
You might also like…
Additional Help & Information