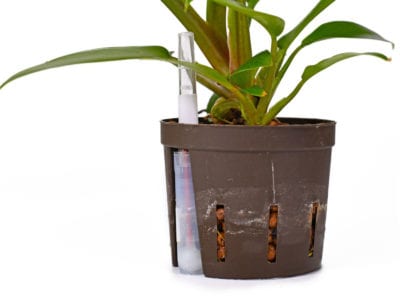 Semi-hydroponics, ‘semi-hydro,’ or hydroculture, is a method for growing plants using an inorganic medium instead of bark, peat moss, or soil. Instead, the medium, usually LECA or clay aggregate, is strong, light, very absorbent, and porous.

The purpose of using semi-hydroponics for houseplants is to make their care easier, especially when it comes to under or overwatering. The difference between hydroponics and semi-hydroponics is that semi-hydro uses capillary or wicking action to uptake nutrients and water held in a reservoir.

LECA stands for Lightweight Expanded Clay Aggregate and is also referred to as clay pebbles or expanded clay. It is formed by heating clay to extremely high temperatures. As the clay heats, it forms thousands of air pockets, resulting in a material that is lightweight, porous, and highly absorbent. So absorbent that plants often do not need additional water for two to three weeks.

There are special containers with an inner and outer container available for semi-hydroponic houseplants. However, in the case of orchids, you really only need a saucer, or you can create a DIY semi-hydroponics container.

To create your own double container, use a plastic bowl and poke a couple holes in the sides. This is the interior container and should fit inside the second, outer container. The idea is that water fills the bottom space as a reservoir and then drains off near the roots. The plant’s roots will wick the water (and fertilizer) up as needed.

As mentioned, orchids benefit from the use of semi-hydroponics, but nearly any houseplant can be grown this way. Some may be more suitable than others, of course, but here is a short list of good candidates.

It takes time for plants to get used to semi-hydroponics, so if you are just starting, use your least expensive plant or take cuttings from them instead to start new houseplants.

Use a hydro formulated fertilizer and allow water to run through the pot to flush any accumulated salt away before feeding the plant.

Printer Friendly Version
Read more about Other Propagation Methods
<PreviousNext>
Did you find this helpful? Share it with your friends!
FacebookTweetPinEmail
Related Articles
Newest Articles
You might also like…
Additional Help & Information