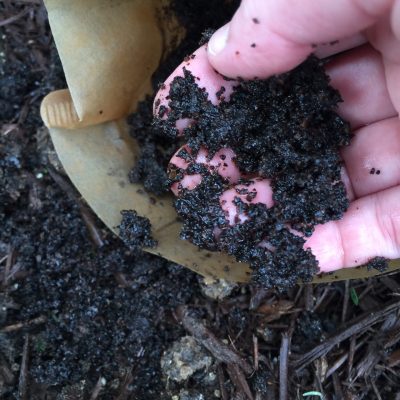 Coffee contains caffeine, which is addictive. Caffeine, in the form of coffee (and mildly in the form of CHOCOLATE!), might be said to make the world go round, as many of us rely on its stimulating benefits. Caffeine, in fact, has intrigued scientists, leading to recent studies regarding caffeine use in gardens. What have they discovered? Read on to find out about caffeine uses in gardens.

Many gardeners, including myself, add coffee grounds directly to the garden or into the compost. The gradually breaking down of the grounds improves the quality of the soil. They contain about 2% nitrogen by volume, and as they break down, the nitrogen is released.

This makes it sound like fertilizing plants with caffeine would be an excellent idea, but pay attention to the part about breaking down. Un-composted coffee grounds may actually stunt the growth of plants. It is better to add them to the compost bin and allow the microorganisms to break them down. Fertilizing plants with caffeine will definitely affect plant growth but not necessarily in a positive manner.

What purpose does caffeine serve, other than to keep us awake? In coffee plants, the caffeine-building enzymes are members of N-methyltransferases, which are found in all plants and build a variety of compounds. In the case of caffeine, the N-methyltranferase gene mutated, creating a biological weapon.

For instance, when coffee leaves drop, they contaminate the soil with caffeine, which curtails the germination of other plants, lessening competition. Obviously, that means too much caffeine can have a detrimental effect on plant growth.

Caffeine, a chemical stimulant, increases the biological processes in not only humans but plants as well. These processes include the ability to photosynthesize and absorb water and nutrients from the soil. It also decreases the pH levels in the soil. This increase in acidity can be toxic to some plants, although others, like blueberries, enjoy it.

Studies involving the use of caffeine on plants have shown that, initially, cell growth rates are stable but soon the caffeine begins to kill or distort these cells, resulting in a dead or stunted plant.

Caffeine as an Insect Repellent

Caffeine use in the garden isn’t all doom and gloom, however. Additional scientific studies have shown caffeine to be an effective slug and snail killer. It also kills mosquito larvae, hornworms, milkweed bugs, and butterfly larvae. The use of caffeine as an insect repellent or killer apparently interferes with food consumption and reproduction, and also results in distorted behavior by suppressing enzymes in the insects’ nervous systems. It is a naturally derived ingredient, unlike commercial insecticides that are full of chemicals.

Interestingly, while high doses of caffeine are toxic to insects, the nectar of coffee blossoms has trace amounts of caffeine. When insects feed on this spiked nectar, they get a jolt from the caffeine, which helps etch the scent of the flowers into their memories. This ensures that the pollinators will remember and revisit the plants, thereby spreading their pollen.

Other insects that feed on the leaves of coffee plants and other plants containing caffeine have, over time, evolved taste receptors that help them identify plants with caffeine and avoid them.

A final word on the use of coffee grounds in the garden. Coffee grounds contain potassium, which attracts earthworms, a boon to any garden. The release of some nitrogen is also a plus. It isn’t the caffeine in the grounds that has any bearing on increased plant growth, but the introduction of other minerals available in the coffee grounds. If the idea of caffeine in the garden has you spooked, however, use decaf grounds and allow them to break down before spreading the resulting compost.