Drones And Gardening: Information On Using Drones In The Garden 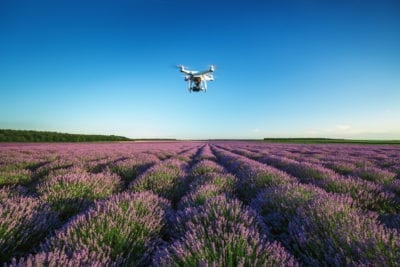 There’s been a lot of debate about the use of drones since their appearance on the market. While in some cases their use is questionable, there is no doubt that drones and gardening are a match made in heaven, at least for commercial farmers. What can using drones in the garden help with? The following article contains information on gardening with drones, how to use drones for gardening, and other interesting facts about these garden quadcopters.

What is a Garden Quadcopter?

A garden quadcopter is an unmanned drone somewhat like a mini-helicopter but with four rotors. It flies autonomously and can be controlled with a smartphone. They go by various names, including but not limited to quadrotor, UAV, and drone.

The price of these units has dropped considerably, which probably accounts for their varied uses from photography and video uses to police or military engagements, disaster management and, yes, even gardening with drones.

About Drones and Gardening

In the Netherlands, famous for its flowers, researchers have been using self-navigating drones to pollinate flowers in greenhouses. The study is called the Autonomous Pollination and Imaging System (APIS) and uses a garden quadcopter to aid in pollinating crops, such as tomatoes.

The drone seeks out flowers and shoots a jet of air that vibrates the branch the flower is on, essentially pollinating the flower. The drone then takes a picture of the blooms to capture the moment of pollination. Pretty cool, huh?

Pollination is one method for using drones in the garden. Scientists at Texas A&M have been using drones since 2015 to “read the weeds.” They use garden quadcopters which have a better ability to hover near the ground and execute precise moves. This ability to fly low and take high resolution images allows researchers to pinpoint weeds when they are small and treatable, making weed management easier, more precise, and less expensive.

Farmers are also using drones in the garden, or rather field, to keep an eye on their crops. This reduces the time it takes to manage not only weeds, but pests, diseases, and irrigation.

How to Use Drones for Gardening

While all of these uses for drones in the garden is fascinating, the average gardener doesn’t really need a time-saving device to manage a smaller garden, so what use do drones have for a standard garden on a smaller scale?

Well, for one thing, they’re fun and prices have dropped considerably, making garden quadcopters accessible to more people. Using drones in the garden on a regular schedule and noting trends can help with future garden plants. It can tell you if certain areas are lacking irrigation or if a certain crop seems to thrive in one area over another.