Trimming Ficus Trees: How And When Should Ficus Be Pruned 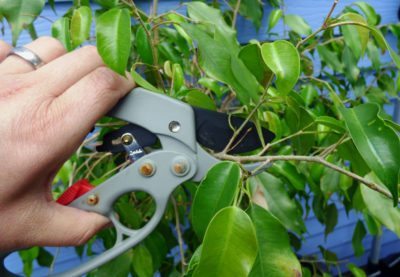 Ficus are one of the most common and easy to grow houseplants. In fact, they are so easy to grow indoors that occasionally the plants outgrow their site. Ficus plants don’t like to be moved, so the best option is to prune the plant to keep it manageable.

Let’s talk about how to prune a ficus tree and, more importantly for the plant’s health, when should ficus be pruned?

Ficus are not winter hardy and are generally grown as houseplants in the United States and other parts of the world. They are native to tropical and subtropical regions and are considered part of this type of exterior landscaping in warm zones. Indoor plants have slow, steady growth but can become heavy on the ends and lose their arching shape. Rejuvenation pruning will make the plant more compact and enhance proper branch formation.

When Should Ficus Be Pruned?

Obviously, trimming ficus trees is necessary if the plant has grown into a byway or is touching the ceiling. Trimming to diminish size is a common reason for pruning any woody plant. Timing is also an issue. Ficus tree pruning needs to take place when the plant is no longer actively growing.

Most plants are vegetatively active in spring and summer, with growth dying down in fall. By winter, the plant has gone into dormancy and is less susceptible to injury. Therefore, winter is the best time for trimming ficus trees. You can prune out dead material at any time during the year.

How to Prune a Ficus Tree

Use a clean sharp pair of bypass pruners and don a pair of gloves. Ficus have a latex sap that may be irritating to skin. First, look at the tree overall and decide what areas need to be minimized. If the tree is too tall, this is clearly where you start, but if you need to create a better silhouette, you will have to make a plan before you start cutting.

There are some cutting rules for ficus tree pruning in order to create a better appearance and keep cuts from looking obvious. Once you have decided which vegetation needs to go, the first step is to remove any dead or broken branches. This will give you an even better idea of the remaining necessary cuts.

Cut just before a growth node so that new growth will sprout there and cover the stump.

Another tip is to remove a branch back to another branch that is one of its size. This will prevent unsightly stubs and restore the size and appearance of the ficus. Cut at a slant away from the node or secondary branch.

If you have a damaged ficus with lots of dead growth, prune away no more than one-third of the material. You can cut more off later as the plant recovers. The best time to try this sort of pruning is after the plant has started re-sprouting so you can ensure that you are not removing recovered material.

In the meantime, give the tree lots of TLC and cross your fingers.

Printer Friendly Version
Read more about Ficus Plants
<PreviousNext>
Did you find this helpful? Share it with your friends!
FacebookTweetPinEmail
Related Articles
Newest Articles
You might also like…
Additional Help & Information