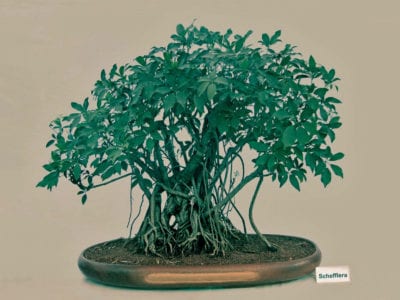 If you are looking for a durable houseplant that thrives in low-light conditions, schefflera is worth a look. It’s extremely popular and easy to grow as long as you understand its needs.

In addition, dwarf schefflera has lots of traits that make it an ideal bonsai tree. While this species doesn’t have the woody stems and compound leaf structure of other bonsais, its trunks, branching, and root structure all work well in this role. In addition, schefflera bonsai trees need less light, live longer, and are more vigorous than traditional bonsai choices.

How to Make a Schefflera Bonsai

Wiring is one of the techniques used to shape the limbs of a bonsai tree. If you are wondering how to make a schefflera bonsai, be especially careful with wiring. Drastically bending the stems can damage them.

Instead, wrap wire around the branch or stem of the schefflera you want to manipulate. Start by wrapping it around the thickest part of the stem or branch, then move to the thinner part. Once the wire is in place, bend it gently in the direction you wish it to move. Move it slightly farther for every day for a week, then allow it to remain in place for another month.

The other parts of training a schefflera bonsai are pruning and defoliation. Prune off all leaves from your dwarf schefflera bonsai, leaving the stalk in place. The following year prune off only the larger leaves. This should be repeated every spring until the average leaf size is where you want it to be.

Your dwarf schefflera bonsai trees must be kept in a humid environment. A greenhouse, where the climate can be controlled, or an aquarium works well. If these are not possible, wrap the trunk with plastic paper to keep the inside warm.

The entire tree should be misted every day, while the plant requires a long drink twice a week. Schefflera bonsai care also requires fertilizer. Use half-strength liquid plant food and apply every few weeks.

As aerial roots grow from the trunk and stems, decide the shape you want the schefflera bonsai to take. Trim out unwanted aerial roots to encourage the more attractive, thicker roots.

Printer Friendly Version
Read more about Schefflera Plants
<Previous
Did you find this helpful? Share it with your friends!
FacebookTweetPinEmail
Related Articles
Newest Articles
You might also like…
Additional Help & Information