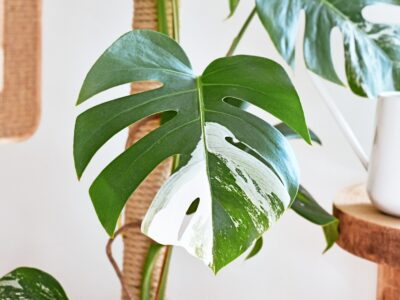 Monstera are tremendously popular houseplants. There is a wide variety of species, many of which feature beautiful variegation. These plants are understory specimens, perfect for low to medium light situations such as office cubicles. Monstera are propagated by cuttings at a growth node. They root readily and are ready for potting up in no time. So, if you have a friend with an especially attractive variegated Monstera deliciosa or any other variety, you’ll soon have a new plant.

The most expensive Monstera ever sold was a variegated species. Also known as Swiss cheese plant, due to the attractively cut leaves, one plant sold for nearly $5,000.00 USD with over 180 bids as collectors vied with each other for the specimen. The plant featured huge white and green, split foliage, and is one of the more rare species. You don’t have to spend that kind of money to get your hands on a white and green Monstera though. In fact, there are also yellow and cream variegations, with a whole host of patterns available.

Monstera are called Mexican breadfruit or hurricane plant as well. They have even been referred to as a split leaf Philodendron, although this is a misnomer. The variegations are due to mutations during growth. The mutation changes the amount of chlorophyll in parts of the leaves. These areas absorb sunlight more slowly than standard green leaves. The variegation may last through the plants life but is often short lived and the plant reverts to green. Variegation causes plants to grow more slowly because of the low chlorophyll, a compound which harnesses solar energy that the plant turns into sugars that fuel growth. Each mutation is different, resulting in many patterns and types of variegation. Some are rare, such as Monstera deliciosa Thai constellation. The unique patterns on this plant make it a rather expensive cutting to purchase. Each cutting will result in the same patterning as the mother plant, but reversion may still occur depending upon how stable the mutation.

Probably the most common variegation in Monstera are cream and white, but yellow varieties are also present. Variegated Monstera albo is a relatively easily sourced yellow streaked Swiss cheese plant. The leaves feature large areas of light yellow bordered by green. Another variety is Monstera var Borsigiana aurea. Aurea is the feminine Latin for “golden.” This ‘Golden Variegated’ monstera has splashes of yellow on a frame of green. There is also a Monstera deliciosa aurea, M. standleyana aura, and M. adonsonii aurea. Each features golden splashes, flecks, speckles, or marbling. Aurea marmorata, another yellow variegated Swiss cheese plant, often has one side of the leaf green, while the other is golden streaked.

Monstera deliciosa Thai constellation is probably out of most of our price ranges. It is not a natural mutation, but rather produced from tissue culture in Thailand. Sciences ability to manipulate certain plant traits has given rise to new varieties of features never before seen. The big leaves develop scattered white speckles. The scattered coloring resembles a starry sky, hence the name. It is not widely available because it has to be produced from tissue cultures which are difficult to grow in mass quantities. A few cuttings are available, starting at around $150.00 USD. Variegated Monstera need more light than completely green plants due to their limited chlorophyll. If you are lucky enough to have a variegated Monstera, make sure it gets six to eight hours of bright sunlight daily.

Printer Friendly Version
Read more about Swiss Cheese Plants
<Previous
Did you find this helpful? Share it with your friends!
FacebookTweetPinEmail
Related Articles
Newest Articles
You might also like…
Additional Help & Information