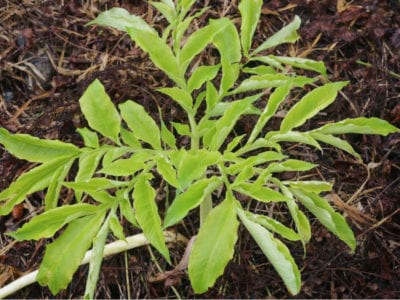 Peony-leaf voodoo lilies produce a large green-purple spathe, out of which grows a large purple-black spadix. At the tip of the spadix is a big, wrinkly purple knot that sort of resembles a wrinkly purple brain. It is this flower, or spathe and spadix, which gives off the rancid scent of rotting meat.

While this makes it an extremely interesting plant, it is one you may not want in your home when flowering in late winter to early summer. This odor may repel your neighbors, but it attracts pollinators to the plant. The flower is followed by a thick brown and green mottled stem that produces large umbrella-like foliage that resembles its namesake peony foliage.

Peony-leaf voodoo lily plants are hardy perennials in zones 9-11. In cooler climates, they are grown as annuals, like cannas or dahlias. The tubers are dug up and stored in a cool, dry place through winter. In tropical areas of zones 9-11, peony-leaf lily tubers will naturalize and also produce seeds that will self-sow.

These seeds can also be collected to plant later. The tubers can be divided as well. These tubers need to be planted deeply to support the very large aerial parts of the plant. In many Asian countries, like Indonesia, these tubers are eaten – lending to its alternate name of elephant foot yam, not to be confused with tortoise plant sharing the same alternate name. Some people report allergic reactions to handling the tuber, though.

Caring for voodoo lilies does not require much work. Although they look very exotic, they don’t require anything special to grow. They prefer a lightly shaded area, with slightly acidic soil. Fertilize peony-leaf voodoo lily plants every other month in late winter to early summer with a fertilizer high in phosphorus, like 15-30-15.