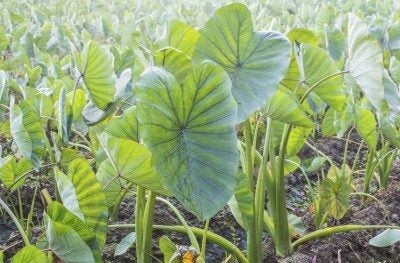 If you have been to the West Indies, or Florida for that matter, you may have encountered something called dasheen. You probably have already heard of dasheen, just with a different name: taro. Read on for additional interesting dasheen plant info, including what is dasheen good for and how to grow dasheen.

Dasheen (Colocasia esculenta), as mentioned, is a type of taro. Taro plants fall into two main camps. The wetland taros, which you may have encountered on a trip to Hawaii in the form of Polynesian poi, and the upland taros, or dasheens, which produce a multitude of eddos (another name for taro) that are used like potatoes and an edible mammy.

Growing dasheen plants are often called “elephant ears” due to the shape and size of the plant leaves. Dasheen is a wetland, herbaceous perennial with huge heart-shaped leaves, 2 to 3 feet (61-91.5 cm.) long and 1 to 2 feet (30.5-61 cm.) across on 3 foot (91.5 cm.) long petioles that radiate out from an upright tuberous rootstock or corm. Its petioles are thick and meaty.

The corm, or mammy, is roughly ridged and weighs around 1 to 2 pounds (0.5-1 kg.) but sometimes as much as 8 pounds (4 kg.)! Smaller tubers are produced off the sides of the main corm and are called eddos. The skin of dasheen is brown, and the interior flesh is white to pink.

So, what is dasheen good for?

Taro has been cultivated for more than 6,000 years. In China, Japan, and the West Indies, taro is widely cultivated as an important food crop. As an edible, dasheen is grown for its corms and the lateral tubers or eddos. The corms and tubers are used just as you would a potato. They can be roasted, fried, boiled, sliced, mashed, or grated.

The mature leaves can be eaten as well, but they need to be cooked in a specific manner to remove the oxalic acid they contain. Young leaves are often used and cooked much like spinach.

Sometimes when growing dasheen, the corms are forced in darkened conditions to produce blanched tender shoots that taste akin to mushrooms. Callaloo (calalou) is a Caribbean dish varying slightly from island to island, but often featuring dasheen leaves and was made famous by Bill Cosby on his sitcom. Poi is made from fermented taro starch garnered from wetland taro.

How to Grow Dasheen

Another use of dasheen is as an attractive specimen for the landscape. Dasheen can be grown in USDA zones 8 to 11 and should be planted as soon as all danger of frost has passed. It grows through the summer and matures in October and November; at which time the tubers can be dug up.

Dasheen tubers are planted whole at a depth of 3 inches (7.5 cm.) and spaced 2 feet (61 cm.) apart in 4-foot (1 m.) rows for cultivation. Fertilize with garden fertilizer or work in a good amount of compost into the soil. Taro also does well as a container plant and along or even in water features. Taro grows best in slightly acidic, moist to wet soil, and in shade to part shade.

The plant is a rapid grower and will spread vegetatively if left unchecked. In other words, it can become a pest, so consider carefully where you wish to plant it.

Taro is native to swampy areas of tropical southeastern Asia and, as such, likes wet “feet.” That said, during its dormant period, keep the tubers dry, if possible.

Printer Friendly Version
Read more about Elephant Ear
<PreviousNext>
Did you find this helpful? Share it with your friends!
FacebookTweetPinEmail
Related Articles
Newest Articles
You might also like…
Additional Help & Information