Caring For Freesias: Guide To Freesia Care In The Garden 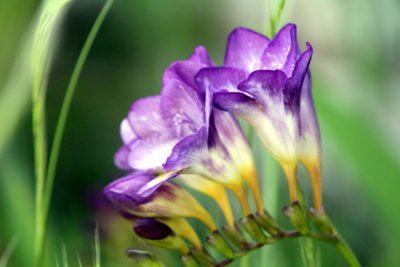 Native to South Africa, freesia was introduced into cultivation in 1878 by German botanist Dr. Friedrich Freese. Naturally, since it was introduced amid the Victorian era, this highly fragrant, colorful flower became an instant hit. Symbolizing innocence, purity, and trust, today freesia is still a popular cut flower for floral arrangements and bouquets. If you’re looking for a long-lasting flower for a cutting garden, continue reading to learn about freesia growing requirements.

They are hardy in zones 9 to 11 but can be grown as annuals or houseplants in cooler climates. In its native range in the Southern Hemisphere, freesia blooms in fall, then goes dormant when winter temperatures become too hot. In Northern Hemisphere zones, it blooms in spring and goes dormant when summer temperatures become too hot.

Whether grown in the garden or containers, the first step of proper freesia care is to provide it with moist, but well-draining soil. In soggy soil, the delicate corms of freesia plants will rot. Plant freesia in a slightly sandy soil that has been amended with moisture retaining organic material. They prefer a location in full sun but can tolerate light shade.

When freesia is actively growing and blooming, the soil should be kept moist. When done blooming, spent blooms can be deadheaded to keep the garden tidy, but the foliage should be left to die back naturally. As the foliage browns and dies back, the soil can be allowed to dry out. If grown in a container or as an annual, this would be the time to prepare to store the corms in a dry, indoor location.

How to Care for Freesias in Gardens

Care of freesias mostly involves just keeping the soil moist during the growing season, but garden grown freesia plants will benefit from a general-purpose flower fertilizer once a year before the bloom period.

Freesia plants in the garden should also be divided every three to five years. Since freesia plants will produce many flowers on their small arching stems, it is often necessary to support them with ring or grid-like grow through plant supports.

Freesia plants are available with single or double flowers. Their blooms come in a wide array of colors such as blue, purple, white, orange, yellow, red, and pink. As a cut flower, freesia will last over a week. Common varieties for the garden include:

Printer Friendly Version
Read more about Freesia
<PreviousNext>
Did you find this helpful? Share it with your friends!
FacebookTweetPinEmail
Related Articles
Newest Articles
You might also like…
Additional Help & Information