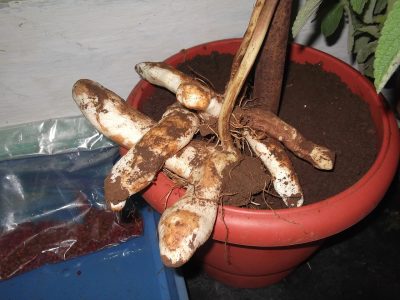 The national flower of Zimbabwe, gloriosa lily is an exotic looking flower that grows on vines reaching up to 12 inches (31 cm.) high in the right conditions. Hardy in zones 9 or higher, many of us can only grow gloriosa as an annual. Like dahlias, cannas, or calla lilies, northern gardeners can store gloriosa tubers indoors over winter. However, these tubers require a little different care than most tubers and bulbs we store throughout winter.

How to Store Gloriosa Lily Bulbs Over Winter

In late summer, as gloriosa flowers began to fade, reduce watering. When the aerial parts of the plant wither and die, cut them back to soil level.

Before the first frost in your location, carefully dig up gloriosa tubers for winter storage. Many times, as the flowers fade and the plant withers, its energy will go into producing a “daughter” tuber. Though you may have started out with only one gloriosa tuber, when you dig it up in autumn, you may find two fork-shaped tubers.

These two tubers can be carefully cut apart before storing gloriosa lily tubers for winter. When handling gloriosa tubers, be very careful to not damage the tips of the tubers. This is the growing tip and damaging it can prevent your gloriosa from coming back.

Gloriosa tubers need at least a six to eight week dormancy period. During this rest period, they cannot be allowed to dry out and shrivel up, or they will die. Many gloriosa tubers are lost over winter due to dehydration. To properly store gloriosa lily tubers through winter, place them in shallow pots with vermiculite, peat moss, or sand.

Storing gloriosa lily tubers in shallow pots through winter will make it easier for you to check on the tubers to make sure they do not dry out. These shallow pots should be stored in an area where temperatures stay between 50 and 60 degrees F. (10-15 C.).

Check these dormant tubers weekly and lightly mist them with a spray bottle. Be sure to only mist them lightly, as too much water can cause them to rot.

Depending on your hardiness zone, begin to increase the temperatures and light level for your gloriosa tubers in February to May. When all danger of frost is over, you can plant your gloriosa tubers outdoors in slightly sandy soil. Again, whenever handling gloriosa tubers, be very careful to not damage the growing tip. Gloriosa tubers should be planted horizontally about 2-3 inches (5-8 cm.) below the soil.

Printer Friendly Version
Read more about Lilies
<PreviousNext>
Did you find this helpful? Share it with your friends!
FacebookTweetPinEmail
Related Articles
Newest Articles
You might also like…
Additional Help & Information