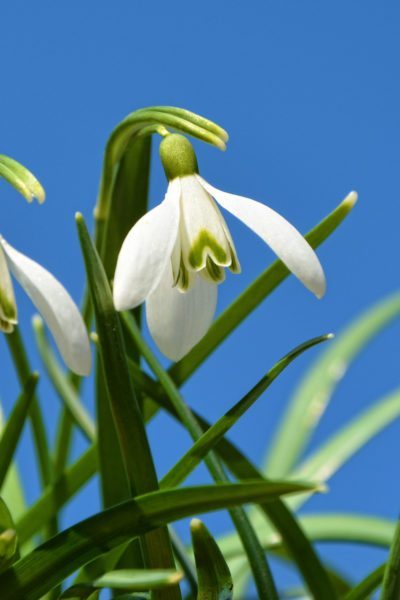 One of the first flowers to bloom in spring, snowdrops (Galanthus spp.) are delicate-looking, little plants with drooping, bell-shaped flowers. Traditionally, snowdrops colors have been limited to pure white, but do non-white snowdrops exist?

Are there Non-White Snowdrops?

In spite of rumors to the contrary, it appears that not much has changed and snowdrops in other colors probably aren’t a “real thing” – at least not yet.

As interest grows, snowdrops in other colors are in high demand, and plant breeders who figure out how to produce true multi-colored snowdrops stand to make a lot of money. The interest is so great, in fact, that enthusiasts have earned the moniker, “galanthophiles.”

Snowdrops in Other Colors

Certain snowdrop species display a hint of color. One example is the giant snowdrop (Galanthus elwesii), which displays conspicuous green blotches on the inner part of the flowers. However, the petals are primarily pure white.

Other species display a certain amount of yellow. Examples include Galanthus nivalis ‘Blonde Inge,’ which displays bronzy yellow marks on the inner segments of the blooms, and Galanthus flavescens, a yellow-tinted flower that grows wild in parts of the U.K.

A couple of Galanthus nivalis f. pleniflorus cultivars also produce some color within the inner segments. ‘Flore Peno’ is green and ‘Lady Elphinstone’ is yellowish.

Are there multi-colored snowdrops in pink and apricot? There have been claims of species with very distinct pink, apricot or golden coloration, including Galanthus nivalis ‘Golden Boy’ and Galanthus reginae-olgae ‘Pink Panther,” but tangible proof appears to be in short supply. If such a flower actually existed, pictures wouldn’t be difficult to find.