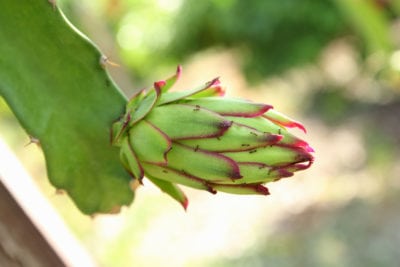 Dragon fruit, or pitaya in Spanish, is a rapid growing, perennial vine-like cacti that thrives in dry tropical climates. Even given the most ideal conditions, however, issues with pitaya plants may still plague the gardener. Pitaya problems may be environmental, or the result of dragon fruit pests and diseases. The following article contains information about pitaya problems and how to identify and manage dragon fruit issues.

Although dragon fruit is heat loving, it can be damaged by long periods of intense sun and heat, resulting in sunscald. To eliminate this pitaya problem, be sure to situate pitaya in an area where you can provide some shade during the hottest periods of the day, especially to young plants.

That said, in general, dragon fruit is tolerant of drought, heat, and poor soil. It is also fairly tolerant of cold; however, damage to the plant will be apparent if temperatures dip below freezing for a long period of time, but pitaya will recover quickly from shorter durations of freezing temperatures.

Because pitayas are members of the cactus family, it is logical to assume that they can withstand long periods of drought. This is true to some extent, although cacti they may be, they do require significantly more water than other cacti members. There is a fine line here, however, as too much water will result in bacterial and fungal diseases and lack of soil moisture reduces blossoming, thus fruiting.

Do not water pitaya during the rainy spring lest it become overly saturated, but do provide irrigation once temperatures have risen and rain is less likely.

We’ve touched on the dragon fruit issue involving bacterial and fungal disease above. Anthracnose (Colletotrichum gloeosporioides) is a fungal disease that can infect dragon fruit. It causes halo-like concentric lesions on stems and fruit.

Bipoaris cactivora is a pathogen that causes black/brown spotting on pitaya blossoms and fruit. When the infection is severe, it manifests in branch/stem rot as well. Fusarium oxysporum has also been found to infect dragon fruit.

Cactus ‘Virus X,’ or cactus mild mottle virus, is a new virus afflicting pitaya. The infection appears as a splotchy mottling of light and dark green area (mosaic) on branches.

Enterobacteria stem soft rot usually afflicts the tips of pitaya branches. Symptoms appear about 15 days from infection, wherein the tips of the plant soften, yellow, and begin to rot. Plants that are deficient in calcium and nitrogen are most susceptible to severe infection. Most of the time, this disease is fairly benign, although it is wise to cut off the diseased branch.

Botryosphaeria dothidea is another fungal infection that results in blotchy red/brown lesions on the stems of the cacti. Sometimes they look like a ‘bull’s eye’ target and sometimes there may be multiple spots coalescing together. This disease begins as a yellowing on the infected branch progressing to the above mentioned lesions. This disease is passed by unsterile pruning shears and other tools.

Most diseases are spread through unsanitary gardening practices, specifically unsanitary tools. It is important to sterilize your tools between uses so you don’t spread disease. Tools can be sterilized with rubbing alcohol, hydrogen peroxide or a very weak bleach/water solution. Some diseases are spread via contact between an infected plant and an uninfected plant, so it’s a good idea to allow some space between plantings.

Otherwise, treatment for fungal diseases may consist of the application of a copper fungicide. But the best way to manage disease in dragon fruit is to practice sanitary practices; that is, sanitize tools and remove and discard infected plant debris and to keep the plant healthy, watered and fertilized, the surrounding area weed free, and free from pests that can also spread disease.

Keep an eye out for sap-sucking bugs such as leaf-footed Leptoglossus. These insects are known to be a vector that can spread B. dothidea.

Dragon fruit may also attract ants, beetles and fruit flies, but for the most part, pitaya has few pest problems especially in comparison to other crops.

Printer Friendly Version
Read more about Dragon Fruit
<Previous
Did you find this helpful? Share it with your friends!
FacebookTweetPinEmail
Related Articles
Newest Articles
You might also like…
Additional Help & Information