Kanna Plants
By: Becca Badgett, Co-author of How to Grow an EMERGENCY Garden
Printer Friendly Version 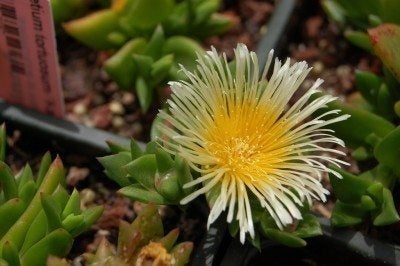 The Sceletium tortuosum plant, commonly called kanna, is a succulent, blooming ground cover used for mass coverage in areas where other plants often fail. Growing kanna plants hold the moisture necessary to live through the driest of summers. However, an Internet search indicates the plant is not used primarily as an ornamental.

According to some info, kanna is used medicinally in its native Cape Provinces of South Africa as a mood elevator and anti-depressant. South Africans chew the plant, which is also said to aid in weight loss and to quell the addictions of smoking and alcoholism. Some have called it the “happy plant.” This plant is also used in teas and tinctures and is sometimes even smoked along with other herbs.

Unfortunately, kanna plant is not often grown in cultivation, and information about kanna plants says it is dying out in the wild. One source encourages growers to attempt growing kanna plants so they can be saved from extinction. Kanna plant care is exacting when plants are young, though becomes minimal as the plants mature.

Information about kanna plants indicates it is a low-growing shrub related to the ice plant. Attractive flowers vary in color from white to yellow and occasionally pale orange or pink. Blooms of the Sceletium tortuosum plant are spiky and appear similar to blooms of the spider mum.

Seeds for this plant are readily available online. If you are able to acquire already sprouted seedlings, the growth process will move along more quickly. Seeds may take several weeks to a few months to germinate. Be patient.

How to Care for Kanna Plant Seedlings

Once seeds have sprouted and have two sets of true leaves, scoop up the clump, along with a good amount of surrounding soil, and plant into a small container. New growth of the young Sceletium tortuosum plant often attracts aphids. Go ahead and treat for aphids before the pests become a problem. A homemade, soapy spray is an effective means of kanna plant care pest control.

Seedlings need less water and the soil should be allowed to dry out slightly between waterings. Though this plant is not a cactus, when learning how to care for kanna plant, you’ll find that it benefits from similar care.

Seedlings benefit from bright light, but avoid direct sun until the plants are moved outside. The kanna plant can be planted into a bigger container or into similar soil outdoors when all danger of frost is past.

When growing kanna in areas with winter freezes, lift the rhizomes and store them for the winter. Container-grown plants can be moved into a greenhouse or garage where temperatures remain above freezing.