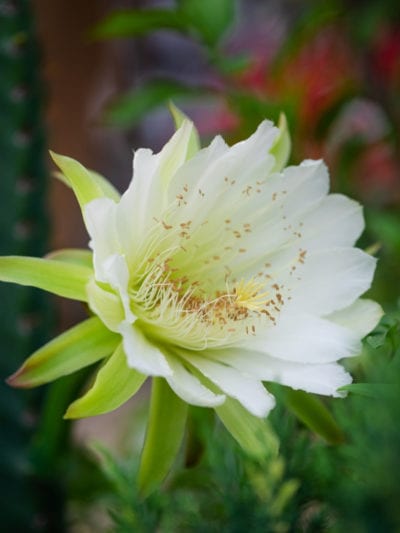 Night blooming Cereus is a cactus that is native to Arizona and the Sonora Desert. There are numerous romanticized names for the plant such as Queen of the Night and Princess of the Night. The name is an umbrella term for approximately seven different genera, which have the night blooming characteristic. The most common are Epiphyllum, Hylocereus or Selenicereus (Epiphyllum oxypetalum, Hylocereus undatus or Selenicereus grandiflorus). No matter which genus, the plant is a Cereus night blooming cactus.

This cactus variety is generally grown as a houseplant in all but the hottest regions of the United States. The Cereus night blooming cactus is a tall climbing cactus that may approach 10 feet (3 m.) tall. The cactus is three ribbed and has black spines along green to yellow stems. The plant is a rather untidy jumble of limbs and requires manicuring to keep it in habit. Night blooming Cereus plants can actually be trained to a trellis in Arizona and other suitable climates.

Night blooming Cereus will not begin to flower until it is four or five years old and will begin with just a couple of flowers. The incidence of blooms will increase as the plant grows older. The flower is breathtaking at almost 7 inches (18 cm.) across and produces a heavenly scent.

The bloom will only open at night and is pollinated by a moth. The Cereus flower is a large white flower borne off the tops of the stems. It will close and wither in the morning but if it was pollinated the plant produces large juicy red fruit.. The flowers usually begin to bloom at 9 or 10 p.m. and are fully open by midnight. The first rays of the sun will see the petals droop and die.

You can force your Cereus to bloom by keeping the plant in a completely dark environment from dusk to dawn during the bloom season. Night blooming Cereus flowers in July to October. This will mimic the outdoor light it experiences.

Reduce watering and don’t fertilize during the fall and winter period so the plant slows growth and reserves energy for the blooms. A rootbound cactus produces more abundant Cereus flowers.

Grow a night blooming Cereus in bright sunshine where temperatures are toasty. The plant has extreme heat tolerance and can handle temperatures over 100 F. (38 C.) with light shade. Potted plants should be grown in a cactus mix or gritty soil with excellent drainage.

Fertilize the plant in spring with a diluted houseplant food.

The limbs can get unruly, but you can trim them without hurting the cactus. Save the cut ends and plant them to create more of the Cereus night blooming cactus.

Bring your cactus outdoors in summer but don’t forget to bring it in when temperatures begin to drop.