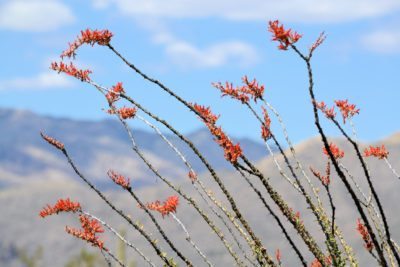 Native to the American southwest, ocotillo is a distinctive desert plant marked by graceful, thorny, wand-like branches that extend upward from the base of the plant. Gardeners love ocotillo for its beauty and resiliency, and hummingbirds are drawn by the red-hot blooms and sweet nectar.

The good news is that ocotillo propagation is surprisingly easy, but the bad news is that rooting seems to be rather hit or miss. If you’re interested in giving it a try, read on to learn the basics of propagating ocotillo plants for your garden.

When to Propagate Ocotillo

When it comes to propagating, ocotillo plants tend to be somewhat unpredictable, and success tends to be hit and miss. You can try to start a new plant any time of year, but in the desert climate, the best time is during the winter rainy season when the extra moisture and cooler temperatures provide better rooting conditions.

How to Propagate Ocotillo by Cuttings

There are a couple of ways to go about propagating ocotillo plants with cuttings – either in the ground or using containers. Let’s start with the easiest method first.

In the Ground: Traditionally, propagating ocotillo has involved simply sticking wands in the ground. This technique generally has a pretty good success rate. If you want to give it a try, just cut several wands when they’re flexible and not stiff or hard. Gather them up in a bunch and wrap the bunch with twine or wire to make it easier to handle.

Dig a hole at least 4 to 6 inches deep (10-15 cm.), then plant the bundle in the hole. Pack the soil firmly around the wands and stake it to help it stand upright. Water well, but don’t amend the soil even if it’s poor and don’t add fertilizer. Sit back and wait, as rooting can take months.

Using a container: You can also plant ocotillo wands in a heavy pot filled with a sandy potting mix. Be sure the pot has at least one drainage hole. Strip the leaves off the bottom section that will be in the soil to prevent rotting and lop a few inches (8 cm.) off the top if the wands are too tall to stand upright.

Put the pot in a sunny place and keep the soil slightly moist until new growth appears, which indicates the cuttings have rooted. Thereafter, water every couple of weeks during the first spring and summer, then cut back to a monthly irrigation in fall and winter. After the first year, ocotillo rarely needs water, although an occasional drink is beneficial during the hottest time of year.

How Do I Propagate an Ocotillo by Seed?

Again, there are a couple of ways to accomplish propagation by seed. The simplest is to simply plant the seeds directly in the ground in a sunny, well-drained spot, and that’s basically all there is to it.

Planting seeds in a container requires a bit more attention:

Plant the seeds about an inch deep (2.5 cm.) in a pot filled with a sandy, well-drained potting mix. Place the pot on a propagation mat set to 95 degrees F. (35 C.) during the day and 70 degrees F. (21 C.) at night. Be sure the pot is exposed to plenty of bright light all day.

Water as needed to keep the top one inch (2.5 cm.) of the potting mix slightly moist. Watch for the seeds to sprout within a couple of weeks. Once that happens, leave the pot on the warm mat for a couple of weeks, then move the pot outside into the bright sunlight.

The new ocotillo plant is mature enough to plant in the ground once it develops spines.

Printer Friendly Version
Read more about Ocotillo
<Previous
Did you find this helpful? Share it with your friends!
FacebookTweetPinEmail
Related Articles
Newest Articles
You might also like…
Additional Help & Information