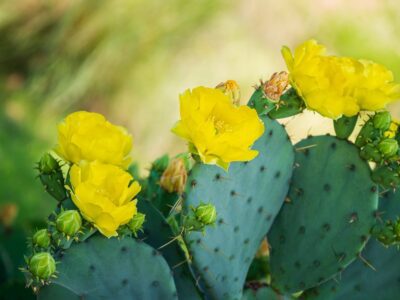 The cold hardy prickly pear cactus (Opuntia humifusa) is beautiful, providing showy yellow blooms in June and July in the landscape where they’ve naturalized. The Opuntia humifusa flower sometimes has a red eye, making them even more striking. Flowers may even bloom red or orange. Each bloom lasts just a day, but the plant continues to blossom for weeks.

When flowers fade, the plant produces tunas, a semi-sweet and juicy fruit. These are popular and collected on a large scale worldwide. They’re used in jams, chutney, or cactus pear jelly.

This cactus family member grows primarily in the eastern area of the U.S., hardy in USDA zones 4 through 9. Opuntia humifusa originated in the northeastern plains of the U.S., although the plant is said to be rare in many areas. Common names include Indian fig, the devil’s-tongue, or the eastern prickly pear. It is attractive to pollinators and attracts gopher tortoises.

The prickly pear was listed in older information as Opuntia compressa. 150 species exist in the Opuntia family. Eastern prickly pear is considered an aged group within this family. This cactus has the widest range of growth of any cacti native to the U.S. Other than the eastern area mentioned above, it is found in New Mexico, Montana, Florida, Massachusetts, and many areas in between. It may also be found growing in Ontario, Canada.

This spreading beauty reaches 1.5 feet tall by 3 feet wide (46 x 91 cm.) as it develops into colonies. Plants may also grow individually. It is sometimes considered a shrub. It has short and spreading fibrous roots that develop from any pad that is broken off.

The pads of this plant, called nopales, are considered the stems, with the spikes that cover them thought of as leaves. Spikes protect the plant from munching wild animals. Pads hold water which allows the cactus to exist well in dry areas. Nopales are edible and used in lots of Mexican cuisines. Keep in mind that areas that are too moist cause problems when growing this plant.

How to Grow Eastern Prickly Pear

These grow easily in colder areas in gravelly or sandy soil and any other soil that drains well, so long as it is in full sun. Prickly pear prefers a soil pH of 6 to 7. The eastern prickly pear range includes areas with clay soil too. Devil’s tongue will grow in sunny clay where good drainage is established, as long as the soil does not remain wet. Don’t plant in rich soil as it will cause growth too quickly, which may result in pest and disease issues.

Propagate prickly pear from cuttings, if you wish, from the previous year’s pads. Allow them to dry for a week and plant them, cut side down, into the garden or a container—being careful of the spines. Thick leather gloves are somewhat helpful against the spines. Use tongs. Plant in containers to keep them closer to the home. Use caution if children or pets will be in the area.

Printer Friendly Version
Read more about Prickly Pear Cactus
<Previous
Did you find this helpful? Share it with your friends!
FacebookTweetPinEmail
Related Articles
Newest Articles
You might also like…
Additional Help & Information