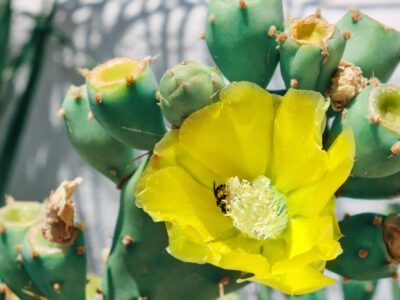 What is a Spineless Prickly Pear?

The spineless prickly pear is a type of evergreen cactus that, unlike other types of prickly pear cacti, isn’t armed and dangerous. If you are looking for a succulent that looks like a cactus but doesn’t have long, pointed spines, an Ellisiana cactus might be the plant for you.

According to spineless prickly pear information, the plant offers many attractive features in addition to not having spines. During the summer, it grows large bright yellow blossoms that attract hummingbirds. It also produces bright red fruits called tunas.

Ellisiana cactus is a very easy-care plant for your backyard. The most important part of spineless prickly pear care is planting the cactus in appropriate soil. Pick a soil that is both well-drained and rich. Gritty or sandy soil is just fine.

Irrigation is a part of spineless prickly pear care, but you don’t have to invest much water here. The cactus prefers evenly moist soil in summer, but it is drought tolerant. It requires little, if any, irrigation in winter.

One of the primary attributes of the Ellisiana cactus is its lack of sharp spines, but it isn’t entirely risk free. You can get tiny slivers from the pads, so when you touch them, do so between the glochid dots or wear gloves just to be safe.

Those growing Ellisiana prickly pears should note that three parts of the cactus are edible. You can eat the cactus pad as a vegetable, add blossom petals to salads, and eat the fruit like any other fruit.

Printer Friendly Version
Read more about Prickly Pear Cactus
<PreviousNext>
Did you find this helpful? Share it with your friends!
FacebookTweetPinEmail
Related Articles
Newest Articles
You might also like…
Additional Help & Information