Titanopsis
By: Becca Badgett, Co-author of How to Grow an EMERGENCY Garden
Printer Friendly Version 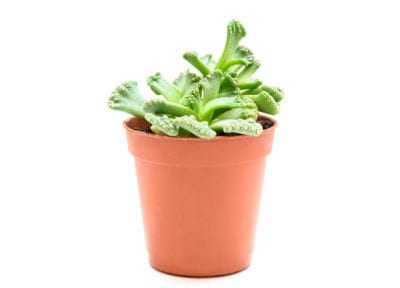 Titanopsis, the living rock or jewel plant, is an unusual succulent that many growers want in their collection. Some attempt growing this plant and have unfortunate results from a single watering. Learning to withhold water is particularly important when providing living rock care.

What is a Titanopsis Living Rock?

The Titanopsis living rock, also called concrete leaf plant, is a clumping, mat-forming succulent that stores water in its sizeable basal rosettes. There are a few different species and the jewel plant is one of the most colorful of succulent plants. Leaf colors vary from green, blue, and grey with red to purple tubercules (jewels) to varying forms of white and reddish brown.

The jewels, or warts, are on top of the plant in most cases and sometimes line the sides. They can look like glittering jewels growing on the top of leaves. Flowers are golden yellow and appear in winter. Called living rock from the fact that only a rock needs less care, maintenance for this plant in quite limited.

Where Does Jewel Plant Living Rock Come From?

The jewel plant living rock, Titanopsis hugo-schlechteri originates from South Africa where it often grows in alkaline soils from limestone outcrops. There they blend in well and can be hard to spot. They are somewhat difficult to grow in cultivation, but it is possible.

Grow them in poor soil that is well-draining and porous, amended with coarse sand. Some growers acclimatize them to full sun, except in summer when they take only bright light. Ideal lighting for this plant is light shade or dappled sun.

How to Grow a Jewel Plant

Known as a winter growing plant, it is dormant in summer when many other succulents are growing. It does not need watering during this time. In fact, watering at the wrong time can cause the plant to shrivel and die.

This plant displays growth in early spring and late autumn, during which you may give it reasonable amounts of water for a drought-preferring succulent, which is still limited. Keep the plant dry at other times.

Care of jewel plant living rock does not usually involve pest control. In the rare event of a pest problem, treat lightly with 70 percent alcohol spray or diluted neem oil. Disease, such as root rot, may appear after overwatering. Should this happen, cut out the damaged part and replant in dry soil. Follow watering guidelines to avoid this issue.