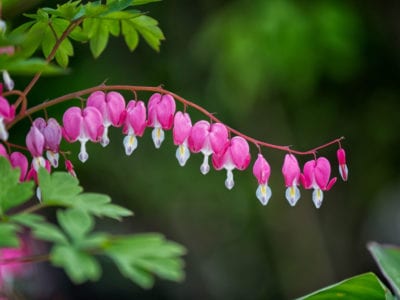 Bleeding heart is one of the most charming wildflowers in North America. These emotive flowers are found in shady meadows and open forest edges. They bloom in spring and can continue to flower in summer if temperatures are cool and they’re in a shady location. However, all good things must come to an end, and hot weather signals the time for the plant to cease flowering and go into dormancy. What other reasons might there be for a non-flowering bleeding heart? Read on to learn more.

Reasons for No Blooms on Bleeding Heart Plants

Bleeding heart was introduced as an ornamental to the West in the mid 1800’s. It became a very popular landscape plant and is still considered a wonderful addition to the woodland perennial garden. These attractive plants enter dormancy when hot temperatures arrive. This is a natural part of the plant’s life cycle, but you can learn how to get a bleeding heart to bloom in the warm season with a little trickery (as explained further on).

Some cultural problems could also be the reason a bleeding heart isn’t blooming or it might be a tiny invasion of insects or disease.

Bleeding heart plants take a season or two to establish as a rule, and you will find a bleeding heart plant not flowering in the first season. Over time, the plant will get larger and require division for better displays and more flowers. If your bleeding heart isn’t blooming, it might need division or it might simply be too young. Divide the roots in early spring or in fall after the foliage has died back.

Insects and disease aren’t usually the reason for no blooms on bleeding heart, but they can contribute to diminished plant health and reduced vigor. These conditions may produce a reduced crop of flowers.

Aphids are the biggest pest of bleeding heart. Their sucking activity can affect the leaves and stems of the plant and, over time, may pose a problem to flowers. Look for tarry honeydew and tiny moving bumps as indicators of an insect infestation.

Leaf spot and Fusarium wilt are two common diseases of bleeding heart. These affect the leaves and should not be a cause for a bleeding heart plant not flowering unless the disease has gotten so out of hand that the plant is dying.

How to Get a Bleeding Heart to Bloom

Bleeding heart plants enliven the landscape in spring and then die back as the season progresses. You can either plant late season bloomers in the area to cover their dormancy or try a little trick.

As soon as the blooms slow down and the foliage begins to yellow, cut the stems back to within one inch of the ground. This may stimulate the plant into forcing a second bloom, especially if the plant is sited in ideal conditions.

Other tips include regular feeding starting in early spring with ¼ cup (59 ml.) of a 5-10-5 food, and continuing administering this every six weeks. Bleeding hearts are heavy feeders and they like uniform moisture. Cover around the root zone with mulch to conserve water and enhance soil nutrition.

If all else fails, there are several cultivars of bleeding heart which have been bred for extended season blooming.