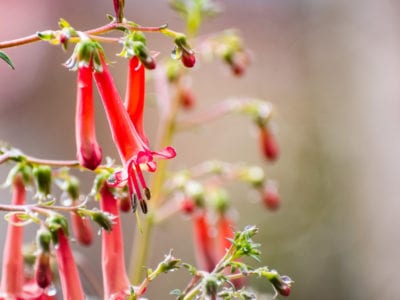 Although the trumpet-shaped flowers are somewhat similar, cape fuchsia plants (Phygelius capensis) and hardy fuchsia (Fuchsia magellanica) are completely unrelated plants. The two have much in common, however, as both are spectacularly beautiful and both attract hordes of butterflies, hummingbirds and pollinating insects to the garden. Now that we’ve established the differences, let’s learn the specifics of growing cape fuchsia.

Also known as cape figwort, cape fuchsia plants are native to South Africa. In fact, the name refers to that country’s Cape of Good Hope.

Look for this bushy plant to reach mature heights and widths of about 3 to 5 feet (.91 to 1.5 m.). Cape fuchsia comes in a range of colors, including creamy yellow, peach, magenta, soft coral, apricot, pale red and creamy white, often with yellow centers. Watch for blooms to appear all summer long.

There’s one thing to be aware of when growing cape fuchsia. This plant, which spreads by underground stems, can be a little on the aggressive side and may overwhelm other plants in your garden. If this is a concern, growing cape fuchsia in large pots will keep the plant contained.

Cape fuchsia is hardy to USDA growing zone 7, although some sources say it may survive as far north as zone 5. If you live in where winters tend to be on the chilly side, you can always grow cape fuchsia as an annual.

Unlike regular fuchsia, cape fuchsia should be planted in full sunlight because it tends to become leggy in too much shade. The one exception is in very hot climates, where the plant benefits from afternoon shade. Well-drained soil is a must.

Save seeds from a mature plant in late summer, then plant them directly in the garden the following spring or start them indoors a few weeks earlier. Cape fuchsia propagation can also be accomplished by division or stem cuttings, or by digging and transplanting suckers from mature plants.

The care of cape fuchsia is easy and not too demanding. Here are some quick tips that will ensure a healthy growing plant: