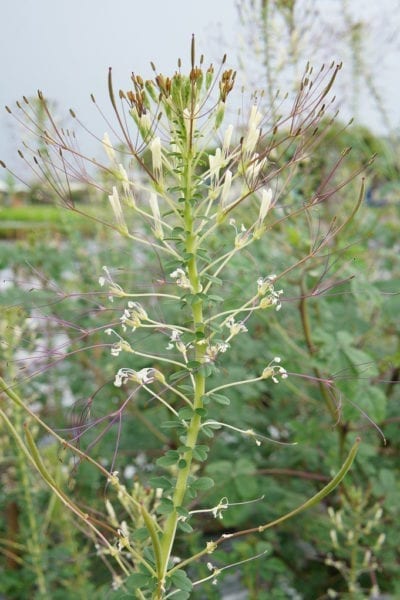 Many people have never heard of chinsaga or African cabbage before, but it is a staple crop in Kenya and a famine food for many other cultures. What exactly is chinsaga? Chinsaga (Gynandropsis gynandra/Cleome gynandra) is a subsistence vegetable found in tropical to subtropical climates from sea level into the higher elevations of Africa, Thailand, Malaysia, Vietnam, and many others regions. In the ornamental garden, we may actually know this plant as African spider flower, a relative of cleome flowers. Keep reading for more information on growing chinsaga vegetables.

African cabbage is an annual wildflower that has been introduced in many other tropical to subtropical parts of the world, where it is often considered an invasive weed. Chinsaga vegetable can be found growing along roads, in cultivated or fallow fields, along fences, and irrigation canals and ditches.

It has an erect, branching habit that usually attains heights of between 10 to 24 inches (25-61 cm.). The branches are sparsely leafed with three to seven oval leaflets. The plant blooms with white to rose colored blooms.

Since African cabbage is found in so many places, it has a plethora of whimsical names. In English alone, it may be referred to as African spider flower, bastard mustard, cat’s whiskers, spider flower, spider wisp, and wild spider flower.

It is high in several nutrients, including amino acids, vitamins, and minerals and, as such, is an important part of the diets of many Southern African people. The leaves are around 4% protein and also have antioxidative properties.

In Thailand, the leaves are commonly fermented with rice water and served as a pickle condiment called phak sian dong. The seeds are also edible and are often used in place of mustard.

Another chinsaga vegetable use is not culinary. Due to the antioxidative properties the leaves have, they are sometimes used as a medicinal herb to aid people with inflammatory diseases. The roots are used to treat fever and juice from the root to treat scorpion stings.

How to Grow African Cabbage

Chinsaga is hardy to USDA zones 8 through 12. It can tolerate sandy to loamy soils but prefers well-draining soil with a neutral to basic pH. When growing chinsaga vegetables, be sure to select a site that has full sun with plenty of room to spread.

Sow seeds on the soil’s surface or lightly cover with soil in the spring indoors, or in a greenhouse. Germination will take place in 5 to 14 days at 75 degrees F. (24 C.). When the seedlings have their first couple sets of leaves and soil temperatures have warmed, harden them off for a week prior to transplanting outside.