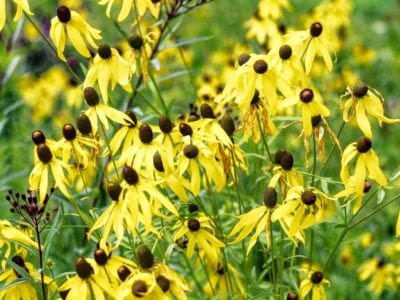 About the Gray Headed Coneflower Plant

Gray headed coneflower (Ratibida pinnata) is a native perennial flower in much of the central U.S. and southeastern Canada. It grows naturally in meadows and prairies, along roads and railroads, and sometimes in open forests.

It grows up to five feet (1.5 m.) tall with long, strong stems that produce one bloom each. The flowers have a grayish brown center. It is shaped like an elongated cylinder or cone, which is how the plant gets one of its common names: gray-headed Mexican hat. The center with hanging yellow petals resembles a sombrero. A unique characteristic of the gray headed prairie coneflower is its aroma. If you bruise the central cone, you’ll get a whiff of anise.

Gray headed coneflower is a great choice for native plantings. It grows readily and naturalizes particularly well in open, sunny spaces. Use it in a spot where the soil is poor and other plants are difficult to grow. In a bed, grow them in mass plantings, as individual plants are thin and a little scraggly.

It’s easy to grow these flowers from seed. They won’t need much watering or other care once mature. Just be sure that the soil in which you plant them drains well and won’t get soggy.

Gray headed coneflower seeds develop on the cone as the blooms fade and are reliable for propagating the plant. You can leave the seed heads in place to re-seed or you can collect them. You can also propagate by division.

Printer Friendly Version
Read more about Coneflower
<PreviousNext>
Did you find this helpful? Share it with your friends!
FacebookTweetPinEmail
Related Articles
Newest Articles
You might also like…
Additional Help & Information