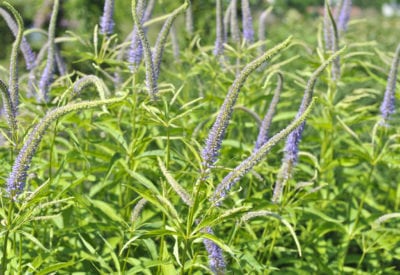 Native wildflowers make wonderful garden guests, as they’re easy care, often drought-tolerant and absolutely lovely. Culver’s root flowers deserve your consideration. What is Culver’s root? It’s a native perennial plant that shows off in summer with long stalks of tiny white blossoms beloved by bees, both domesticated and wild. Read on for information on how to grow Culver’s root, as well as tips on Culver’s root care.

What is Culver’s Root?

You may have seen Culver’s root flowers (Veronicastrum virginicum) growing along riverbeds and roadsides in the east, from New England down to Texas. They appear in summer, with long white racemes of small flowers, wildly popular with bees.

The spiky flowers look like candelabras, with their many branches tipped by the inflorescences. Occasionally, you see blue or pink flowers if Russian varieties have been grown nearby and the plants hybridize.

So what is Culver’s root? It’s a native plant in the figwort family with flowering stalks that can grow as tall as you are, and maybe a little taller. The stems are stout and erect, bearing leaves in whorls. Culver’s root flowers and foliage have been used in herbal medicine for a long time, and reputed to be useful for various digestive tract ailments.

In fact, while its genus name comes from the plant’s resemblance to Veronica, or speedwell plants, the common name derives from 18th century American physician, Dr. Culver, who recommended this plant’s root for medicinal use.

If you want to start growing Culver’s root in your garden, remember how tall its stems grow and situate it appropriately. Place Culver’s root in the back of your beds to prevent shading out shorter flowers behind it.

Take your tips from Mother Nature. In the wild, Culver’s root usually grows in moist sites such as along riverbeds, in moist meadows or in sunny, damp woodlands. That means that Culver’s root care is easiest when the perennial is planted in moist soil in a sunny spot.

While the plants can be somewhat hard to grow from seeds, it can be done. Expect flowers the second or third year. Another alternative for growing Culver’s root is to purchase plugs. With plugs, you’ll see flowers in the second year, if not before.