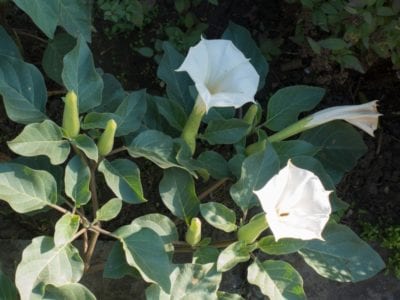 The debate over moonflower vs. Datura can get pretty confusing. Some plants, like Datura, have a number of common names and those names often overlap. Datura is sometimes called moonflower, but there is another type of plant that also goes by the name moonflower. They look similar but one is much more poisonous, so it’s worth it to know the difference.

Is Moonflower a Datura?

Datura (Datura stramonium) is a type of plant that belongs to the Solanaceae family. There are several species of Datura with many common names including moonflower, devil’s trumpet, devil’s weed, loco weed, and jimsonweed.

The common name moonflower also is used for another plant. This one is known as moonflower vine, which helps to distinguish it from Datura. Moonflower vine (Ipomoea alba) is related to morning glory. Ipomoea is toxic and has some hallucinogenic properties, but Datura is much more toxic and can even be deadly.

How to Tell Ipomoea from Datura

Datura and moonflower vine get confused very often because of the common name, and they look very similar to one another. Both produce flowers that are trumpet shaped, but Datura grows lower to the ground while moonflower grows as a climbing vine. Here are some other differences:

Knowing the differences and how to tell Ipomoea from Datura is important because of their toxicity. Ipomoea produces seeds that have a mild hallucinogenic effect but is otherwise safe. Every part of the Datura plant is toxic and can be deadly to animals and humans if consumed in large amounts.