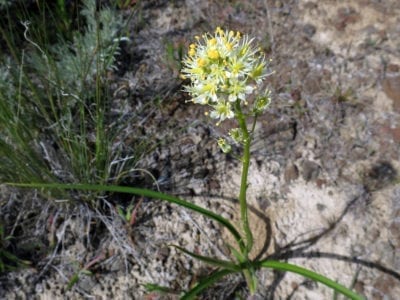 Death camas (Zigadenus venenosus) is a toxic weedy perennial that grows mostly in the western U.S. and across the Plains states. Knowing how to recognize death camas is important to avoid ingesting something toxic, although this plant is mostly a risk to livestock and grazing animals.

What is Death Camas?

Death camas plants include several species of Zigadenus. At least 15 species are native to North America and grow in all kinds of habitats: moist mountain valleys, dry hills, forest, grassland, and even coastal and marsh areas.

There may be some variation in toxicity level from one species to the next, but ALL should be considered dangerous. It is mostly livestock affected by death camas poisoning. When they graze, as little as a half a pound of leaves consumed can be deadly. The mature leaves and the bulbs are most toxic.

Symptoms of poisoning by death camas include vomiting and excessive salivation, tremors, weakness, loss of control over body movements, convulsions, and coma. Ultimately, an animal that has eaten too much will die.

Identifying death camas is important if you have livestock, but it can also help prevent people from consuming it. The leaves are grass-like and V-shaped. They grow from a bulb that resembles an onion with a dark outer coating. Look for single, unbranched stems. The stem terminates in a raceme of flowers with colors ranging from greenish white to cream or even a little pink. The raceme has multiple, six-petaled, small flowers.

It is possible to mistake death camas for something edible, so be very aware of the characteristics of edible plants before consuming them. Death camas can be mistaken for wild onion, in particular, with its onion-like bulb. However the bulbs of death camas lack the distinctive onion scent. Also, look out for sego lily and camas plants, which look similar to death camas.

If you are ever unsure if the plant you are looking at is a death camas, it’s best to leave it alone!

The biggest risk to livestock is in early spring, as death camas is one of the first plants to emerge. Inspect any grazing area before turning animals loose and avoid any areas that are heavily populated with death camas.