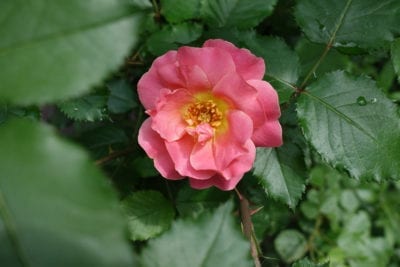 What is a semi-double flower? When it comes to growing flowers, it can be difficult to sort through the various terminology and nearly countless ways of describing blooms. Understanding what growers mean by “single” and “double” blooms is fairly straightforward, but the term “semi-double blooms” is slightly more complex.

Single flowers are comprised of a single row of petals arranged around the center of the flower. Five is the most common number of petals. Plants in this group include potentilla, daffodils, coreopsis, and hibiscus.

Flowers such as pansies, trillium, or mock orange generally only have three or four petals. Others, including daylily, scilla, crocus, watsonia, and cosmos, can have up to eight petals.

Bees prefer single flowers, as they provide more pollen than double or semi-double blooms. Bees are frustrated by double flowers because the stamens are often not functional or are hidden by the dense petals.

Double flowers generally have 17 to 25 petals radiating around the stigma and stamen in the center of the plant, which may or may not be visible. Double flowers include lilacs, most roses, and types of peonies, columbine, and carnations.

Double flowers are actually abnormalities, but herbalists of the Renaissance period recognized the beauty of the blooms and cultivated them in their gardens. Sometimes, double flowers are flowers within flowers, like daisies.

Semi-double flowering plants have two to three times more petals than typical single flowers, but not quite as many as double blooms – generally in two or three rows. Unlike many varieties of double flowers, semi-double petals allow you to see the center of the plant.

Examples of semi-double flowers include gerbera daisies, certain types of asters, dahlias, peonies, roses, and most types of Gillenia.