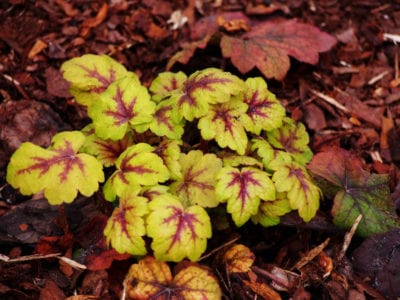 Heucherella and heuchera are both North American natives and both are suitable for growing in USDA plant hardiness zones 4 through 9. Heucherella, often grown as a groundcover or border plant, inherited the attractive foliage of the heuchera plant, but the heart-shaped leaves are usually smaller. The foamy-looking heucherella blooms (reminiscent of foamflower) are available in shades of pink, cream and white.

Heucherella is more resistant to rust disease and tends to be more tolerant of both heat and humidity. Otherwise, the differences in color and form of the two plants depend largely on the variety, as both are available in a variety of sizes and shapes.

How to Grow a Heucherella Plant

Growing heucherella isn’t difficult, but well-drained soil is critical to prevent the roots from drowning. Amend the soil before planting with compost or well-rotted manure.

Shade is best for most heucherella varieties, although the plant can tolerate more sun in cooler climates. Darker leaves also tend to be more sun tolerant once established.

While heucherella is relatively drought tolerant, it benefits from occasional watering during warm, dry weather. Don’t allow the plant to become badly wilted, but be careful not to overwater, as heucherella is prone to rot in soggy, poorly drained soil.

Heucherella is a low feeder, but the plant benefits from regular applications of a water-soluble fertilizer mixed at half strength. Avoid high-nitrogen fertilizers, which can cause spindly growth.

Replant heucherella in freshly amended soil every three or four years to keep the plant healthy and vibrant. Discard the oldest part of the crown.

As you can see, the care of heucherella is relatively easy and similar to that of its parents.