Varieties Of Lantana: Learn About Lantana Plants For The Garden 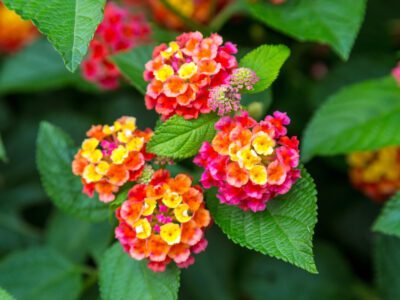 Summer flowers are the song in the season’s heart. Lantanas are perfect examples of lively colored blooms that persist all season long. Over 150 species make up the family and there are many more types of lantana from which to choose due to heavy hybridization. One of the lantana varieties, Lantana camara, should be avoided in moist, warm regions where it can naturalize and become a pest plant. Most of the varieties of lantana are annuals, unless grown in the warmer regions of the continent.

Lantana nursery species are derived primarily from Lantana camara and Lantana montevidensis, a trailing form. Common lantana (L. camara) is the most cultivated form of the group.

Wild lantana (Lantana horrida), found in Texas and other warm, arid regions, has pungently scented leaves. Lantana plants for the garden can flower all year in warmer climates. There are now dwarf forms of the plant as well as the trailing and bushy varieties of lantana.

Lantana plants that are hybridized from L. montevidensis produce long branches. These are useful in containers as trailing accents and most get less than 12 inches (31 cm.) tall. ‘Clear White,’ ‘Trailing Yellow,’ and ‘Weeping Lavender’ have names indicative of their spreading habit. There is also ‘New Gold’ and ‘Alba’ as well as ‘White Lightning’ and ‘Lavender Swirl.’

The dwarf or petite lantana varieties also tend to have a spreading habit. The smallest lantana available are in the Patriot series. ‘Patriot Popcorn’ and ‘Patriot Honeyglove’ are white and yellow with Honeyglove adding blush pink to the flower display.

One of the most commonly grown species is “Miss Huff.” It is a reliable bushy form that can get 5 to 6 feet (1.5-2 m.) tall in one season. The flowers are a gorgeous mixture of coral, orange, pink, and yellow.

Many of the bushy forms are also sterile, meaning they won’t produce toxic fruits. ‘Pinkie’ is bicolor and a compact sterile plant, while ‘Patriot Dean Day Smith’ is a pastel plant that produces a 5 foot (1.5 m.) tall mound.

One of the most astounding lantana plant varieties is ‘Silver Mound,’ which as its name suggests, has icy white flowers with golden centers.

One of the quirkiest types of lantana are the popcorn varieties. They are developed for their clusters of fruit. Plants grow 3 feet (1 m.) tall with a similar spread and produce elongated colorful fruit after bloom.

Popcorn lantana (Lantana trifolia) includes two main cultivars: Fruity Pebbles and Lavender Popcorn. These are native to Central and South America and prefer hot, sunny locations. The species is also known as 3-leaved lantana due to the leaves which appear in whorls of three.

The bright purple to pink dense clusters of fruits are often thought to be more ornamental than the flowers themselves, and the plants grow rapidly in tropical to sub-tropical regions.

Printer Friendly Version
Read more about Lantana
<PreviousNext>
Did you find this helpful? Share it with your friends!
FacebookTweetPinEmail
Related Articles
Newest Articles
You might also like…
Additional Help & Information