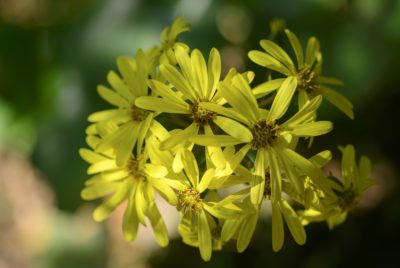 Leopard plant is native to Asia. Some cultivars sport variegated, leopard-spotted leaves, thus the descriptive name. Small, daisy-like flowers atop 3- to 4-foot (1 m.) stems appear in late November or early December. However, much like hosta, some gardeners pinch the spiky blooms to direct energy to the leaves.

Leopard plant is evergreen in USDA plant hardiness zones 7 through 10, but the plant dies down if temperatures drop below 30 F. (-1 C.). Unless exposed to a hard freeze, the leaves will regrow in spring.

When mass planted, leopard plants make great groundcovers for a woodland garden. They are a good choice for damp areas, including alongside a pond or stream. They also grow well in large containers.

Leopard plants in the garden can get by with very little sun and too much summer sun will wilt the leaves. Look for a spot in partial or light shade. (Growing a leopard plant is much like growing a hosta.) A location protected from the intense wind is also beneficial.

Leopard plants aren’t typically susceptible to plant diseases and they don’t have too much trouble with pests – except for slugs that love to dine on the big, juicy leaves. Watch for signs of slug damage and treat accordingly.

The best method of leopard plant propagation is to simply dig and divide mature clumps in spring.