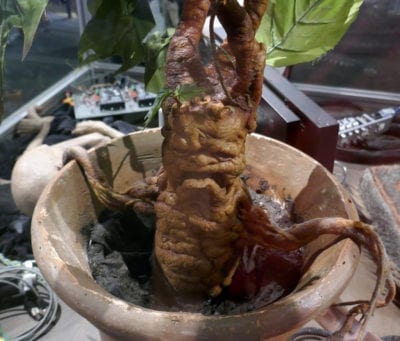 Mandragora officinarum is a real plant with a mythical past. Known more commonly as mandrake, the lore generally refers to the roots. Beginning in ancient times, the stories about mandrake included magical powers, fertility, possession by the devil, and more. The fascinating history of this plant is colorful and even popped up in the Harry Potter series.

The history of mandrake plants and their use and legends goes back to ancient times. Ancient Romans, Greeks, and Middle Eastern cultures were all aware of mandrake and all believed the plant had magical powers, not always for good.

Mandrake is native to the Mediterranean region. It is a perennial herb with a large root and poisonous fruits. One of the oldest references to mandrake is from the Bible and probably dates to 4,000 B.C. In the story, Rachel used the berries of the plant to conceive a child.

In Ancient Greece, mandrake was noted for being a narcotic. It was used medicinally for anxiety and depression, insomnia, and gout. It was also used as a love potion. It was in Greece that the resemblance of the roots to a human was first recorded.

The Romans continued most of the medicinal uses that the Greeks had for mandrake. They also spread the lore and use of the plant throughout Europe, including Britain. There it was rare and costly and was often imported as dried roots.

The legendary stories about mandrake are interesting and revolve around it having magical, often menacing powers. Here are some of the most common and well-known myths about mandrake from earlier times:

Mandrake was thought to crop up under gallows, wherever the body fluids of condemned prisoners landed on the ground.

Disclaimer: The content of this article is for educational and gardening purposes only. Before using or ingesting ANY herb or plant for medicinal purposes or otherwise, please consult a physician, medical herbalist or other suitable professional for advice.