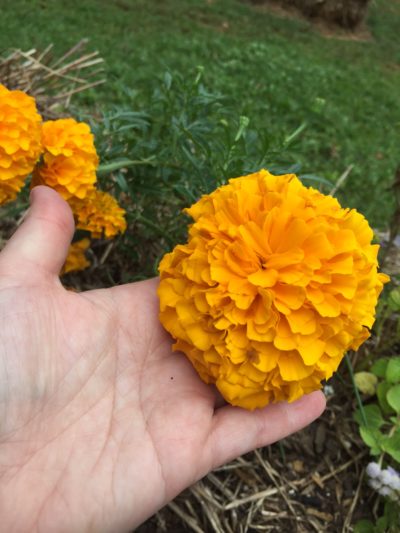 “The marigold abroad her leaves doth spread, because the sun and her power is the same,” wrote poet Henry Constable in a 1592 sonnet. The marigold has long been associated with the sun. African marigolds (Tagetes erecta), which are actually native to Mexico and Central America, were sacred to the Aztecs, who used them as a medicine and as a ceremonial offering to the sun gods. Marigolds are still called the herb of the sun because of this. In Mexico, African marigolds are a traditional flower placed on altars on The Day of the Dead. Continue reading for more African marigold information.

Growing African marigolds or French marigolds around vegetable gardens to repel harmful insects, rabbits, and deer is a gardening habit that goes back for centuries. The scent of marigolds is said to deter these pests. Marigold roots also emit a substance that is toxic to harmful root nematodes. This toxin can stay in the soil for a few years.

Be careful when handling marigolds because some people can get skin irritations from the plant’s oils. While marigolds deter pests, they attract bees, butterflies, and ladybugs to the garden.

How to Grow African Marigolds

African marigold plants propagate easily from seed started indoors four to six weeks before last frost date or sown directly in the garden after all danger of frost has passed. Seeds usually germinate in 4 to 14 days.

African marigold plants can also be purchased at most garden centers in the spring. When planting or transplanting African marigold plants, be sure to plant them slightly deeper than they were originally growing. This helps them stabilize to support their heavy flower tops. Tall varieties may need to be staked for support.

These are some popular African marigold varieties: