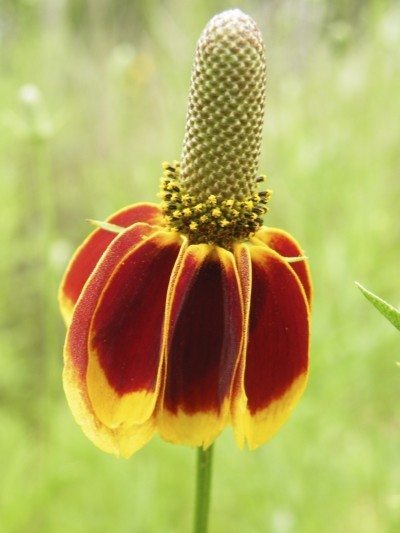 The Mexican hat plant (Ratibida columnifera) gets its name from its distinctive shape– a tall cone surrounded by drooping petals that look something like a sombrero. Mexican hat plant care is very easy, and the payoff is high, as long as you’re careful about spreading. Keep reading to learn more about how to grow a Mexican hat plant.

What is a Mexican Hat Plant?

Also called the prairie coneflower and thimble-flower, the Mexican hat plant is native to the prairies of the American Midwest, but it has spread throughout and can be grown in most of North America.

Its characteristic shape is made up of a tall, leafless stalk that can reach 1.5 to 3 feet (46-91 cm.) in height, ending in a single flower head of a reddish brown to black spiky cone rising above three to seven drooping red, yellow, or red and yellow petals.

Most cultivars are perennials, though a particularly harsh winter will kill it off. Its foliage– deeply cleft leaves near the base– has a strong odor that works as a fantastic deer repellent.

How to Grow a Mexican Hat Plant

The Mexican hat plant is a hardy wildflower and very easy to grow. In fact, the most likely problem is that it will crowd out weaker plants nearby. Plant it by itself or mingled with other strong, tall perennials that can stand up to it.

Mexican hat plant care is minimal. It will grow in virtually any well-drained soil in full sun and is very drought tolerant, though regular watering during very dry periods will produce better flowers.

You can grow Mexican hat plants from seed, though you may not see flowers until the second year. Spread the seed in autumn, lightly raking the soil to ensure a good mixture.

If this sounds like something you’d like to try, use this Mexican hat plant information and grow some of your own for enjoyment year after year.