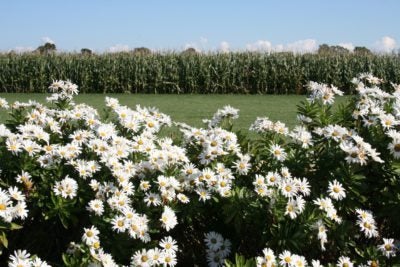 Planting flowerbeds with plants that bloom in perfect succession can be tricky. In spring and summer, stores are filled with a huge variety of beautiful flowering plants to tempt us right when are gardening bug is biting. It’s easy to go overboard and quickly fill every empty space in the garden with these early bloomers. As summer passes, bloom cycles end, and many spring or early summer plants may go dormant, leaving us with holes or bloom lapses in the garden. In their native and naturalized ranges, Montauk daisies pick up the slack in late summer to fall.

Nipponanthemum nipponicum is the present genus of Montauk daisies. Like other plants referred to as daisies, Montauk daisies were classified as chrysanthemum and leucanthemum in the past, before finally getting their own genus name. ‘Nippon’ is generally used to name plants that originated in Japan. Montauk daisies, also known as Nippon daisies, are native to China and Japan. However, they were given their common name ‘Montauk daisies’ because they have naturalized on Long Island, all around the town of Montauk.

Nippon or Montauk daisy plants are hardy in zones 5-9. They bear white daisies from midsummer to frost. Their foliage is thick, dark green, and succulent. Montauk daisies can hold up under light frost, but the plant will die back with the first hard freeze. They attract pollinators to the garden but are deer- and rabbit-resistant. Montauk daisies are also salt- and drought-tolerant.

How to Grow Montauk Daisies

Montauk daisy care is quite simple. They require well-draining soil and have been found naturalized on sandy coasts all along the eastern coast of the United States. They also require full sun. Wet or damp soil and too much shade will result in rot and fungal diseases.

When left untended, Montauk daisies grow in shrub-like mounds to 3 feet (91.5 cm.) tall and wide and can become leggy and flop over. As they bloom in midsummer and fall, the foliage near the bottom of the plant may yellow and drop.

To prevent legginess, many gardeners pinch back Montauk daisy plants in early to midsummer, cutting the plant back by half. This keeps them more tight and compact, while also forcing them to put on their best bloom display in late summer and fall when the rest of the garden is waning.