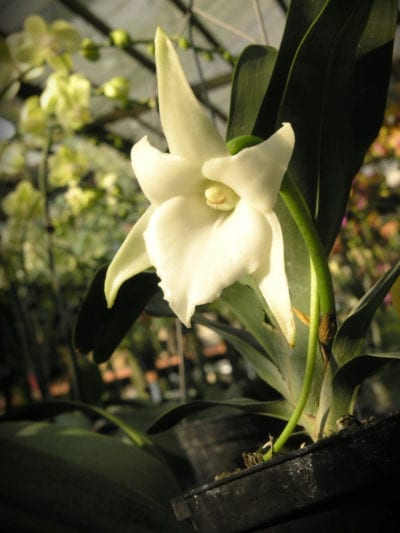 Although it is a member of the Orchidaceae family, which boasts the largest number of flowering plants, Angraecum sesquipedale, or star orchid plant, is definitely one of the more unique members. Its species name, sesquipedale, is derived from the Latin meaning “one and a half feet” in reference to the long flower spur. Intrigued? Then perhaps you are wondering how to grow a star orchid. This article will help.

Although there are over 220 species in the genus Angraecum and new ones are still being discovered in the Madagascan forests, star orchids are a stand-out specimen. Star orchids are also known as Darwin’s orchids or comet orchids. These epiphytic plants are native to the coastal forest of Madagascar.

In their native habitat, the plants bloom from June to September, but in North America and Europe, these orchids bloom once a year between December and January. The timing of this bloom has led this plant to be christened the Christmas star orchid or star of Bethlehem orchid.

The blooms of star orchid plants have an extremely long tubular extension or “spur” at the base of which is its pollen. So long, in fact, that when Charles Darwin received a specimen of this orchid in 1862, he surmised that a pollinator must exist with a tongue as long as the spur, 10 to 11 inches (25-28 cm.) long! People thought he was crazy and, at the time, no such species had been discovered.

Lo and behold, 41 years later, a moth with a proboscis 10 to 11 inches (25-28 cm.) long was discovered in Madagascar. Named the hawk moth, its existence proved Darwin’s theory regarding co-evolution or how plants and pollinators can influence each other’s evolution. In this case, the sheer length of the spur necessitated the evolution of a pollinator with a longer tongue, and as the tongue got longer, the orchid had to lengthen the size of its spur so it could be pollinated, and so on and so on.

How to Grow a Star Orchid

Interestingly, this species was discovered by an aristocratic botanist by the name of Louis Marie Auber du Petit Thouars (1758-1831) who was exiled to Madagascar during the French Revolution. Upon his return to France in 1802, he brought a large collection of plants which he donated to the Jardin des Plantes in Paris.

This particular orchid is slow to reach maturity. It is a white blossomed night-blooming orchid whose scent is at its peak at night when its pollinator is making its rounds. Growing star orchid plants need between four and six  hours of indirect sunlight and daytime temps of between 70 to 80 degrees F. (21-26 C.) with night temps in the mid 60’s (15 C.).

Use a potting soil that contains lots of bark or grow the orchid on a slab of bark. A growing star orchid, in its native habitat, grows on tree bark. Keep the pot moist during the growing season but allow drying out slightly between watering in the winter once it has blossomed.

Since this plant is native to moist tropical climes, humidity is important (50-70%). Mist the plant with water each morning. Air circulation is also paramount. Keep it near a fan or open window. The draft will reduce the risk of developing a fungus for which orchids are highly susceptible.

These plants dislike having their roots disturbed so repot infrequently, or ideally, never.