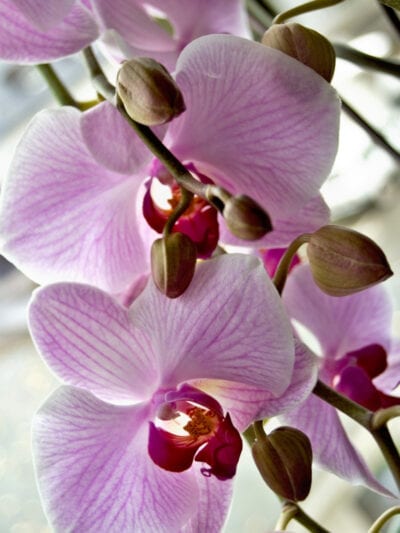 Catasetum orchid species number over 150 and have unusual, waxy flowers that may be male or female. They require less care than some other orchids but do have high heat requirements. It’s a great orchid to grow in a greenhouse or outside in a warm climate.

What is a Catasetum Orchid

Catasetum is a genus of orchids native to Central and South America. In their native range, many of the species grow in the open canopies of trees where it is sunny, warm, and moist. Some grow at the base of palm trees, while others actually grow on rocks and on the ground.

The catasetum orchid type is unique in that it mostly produces separate male and female flowers but can also have hermaphroditic blooms. Conditions of light and water determine which type of flowers a plant will grow. The flowers are also unusual for being fleshy and waxy.

Catasetum orchids grow from pseudobulbs and bloom during the growing season. They then go dormant and lose their leaves. During dormancy, the orchids don’t require much care and should be allowed to dry out significantly.

Grow catasetum orchids in a medium that will hold a significant amount of water. Ideally, they should have a moist potting medium throughout the growing season. Sphagnum moss is a good choice. During the dormant season, you can remove the roots and let them dry.

Catasetum like more light than some other orchid types. Grow it in a bright window where the plant can get a half to three-quarters of a day of strong light. The higher the light, the more likely you are to get female flowers.

These orchids come from a hot climate, so they cannot tolerate colder temperatures. Unless you live in the subtropics or tropics, grow these in a greenhouse. They should have temperatures between 80 and 100 degrees Fahrenheit (27 to 38 Celsius).

The catasetum’s natural growing period is short and wet. They need to store a lot of water in the pseudobulb, so water regularly and heavily as the plant is growing new leaves. You can slow watering as the bulb gets bigger and leaves begin to turn yellow.

Once the leaves have dropped from your catasetum orchid, cease watering completely. Don’t water it again until new growth begins. Keep humidity around 40% to 60% using a tray with gravel and water under the plant or with a humidifier.

During growth, the orchid’s pseudobulb needs to store water and nutrients. Provide a high-nitrogen fertilizer during the growing period and taper it off toward dormancy. Catasetum does best with regular, dilute applications of fertilizer.