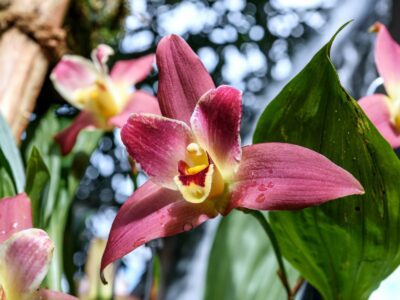 There are at least 30 species of lycaste orchids, and most are relatively easy to grow. Some species are deciduous, while others keep their foliage during dormancy.

Lycaste orchid care isn’t difficult as long as you take care of the plant’s basic needs.

Lycaste orchids perform best in moderate, indirect, or filtered light. Intense sunlight can burn the leaves, while low light will impact the number of blooms. Bright, emerald green leaves are an indication the plant is receiving sufficient light, while brittle edges are a sign that light is too intense. (A little more light is welcome during the winter months).

Humidity levels should be between 60 and 80 percent. It’s fine to spritz the plant occasionally during warm summer weather, but be sure the plant has good air circulation to prevent the development of fungal diseases.

The potting mix should be kept moist, but not soggy. However, mature plants should be kept a little drier, especially between blooming and the appearance of new growth. Deciduous species also benefit from slightly drier soil. During winter, water just enough to keep the bulbs from shriveling, but never allow the potting mix to become bone dry.

Feed lycaste orchids every other watering, using a water-soluble orchid fertilizer at half strength. Cut back to one feeding per month during the winter months.

Repot lycaste orchids every year between early spring and early summer, when new growth is about 3 to 6 inches (8-15 cm.). Remove dead roots, along with old potting mix around the roots. Avoid repotting during the heat of summer.