History Of Red Poppies – Why Red Poppy For Remembrance 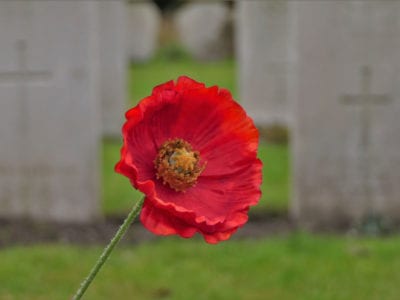 Red poppies made of silk or paper show up on the Friday before Memorial Day every year. Why red poppy for remembrance? How did the tradition of red poppy flowers begin more than a century ago? Read on for interesting red poppy history.

World War I, also known as the First World War or the Great War, took a monumental toll, claiming the lives of more than eight million soldiers between 1914 and 1918. The war also did extensive harm to the environment in Europe, particularly in the war-ravaged areas of northern Europe and northern Belgium where fields, trees, and plants were destroyed.

Surprisingly, bright red poppies began popping up amidst the destruction. The tenacious plants continued to flourish, possibly benefiting from the lime deposits remaining in the rubble. The poppies inspired Canadian soldier and physician, Lieutenant Colonel John McCrae, to write “In Flanders Field,” while serving at the front lines. Soon, poppies became an apt reminder of the bloodshed during the war.

Anna E. Guerin originated the poppy day remembrance in Europe. In 1920, when asked to speak at the American Legion conference in Cleveland, Madame Guerin suggested that all WWI allies should use artificial poppies to memorialize fallen soldiers and that the poppies would be made by French widows and orphans.

Shortly before the armistice, Moina Michael, a professor at the University of Georgia, noticed an article about Geurin’s project published in Ladies Home Journal. At that time, Michael had taken a leave of absence to do volunteer work on behalf of the Young Women’s Christian Association (YWCA).

Once the war finally ended, Michael vowed that she would always wear a red poppy. She also devised a plan that involved the making and selling of silk poppies, with the proceeds to support returning veterans.

The project got off to a rocky start but soon, Georgia’s American Legion came on board and the red poppy became the organization’s official flower. A national distribution program, in which sales of the poppies would support veterans, active duty soldiers, and their families began in 1924.

Today, the Friday before Memorial Day is National Poppy Day, and the bright red flowers are still sold around the world.

Red poppies, also known as red weed, field poppy, corn rose, or corn poppy, are so stubborn and tenacious that many people think of them as pesky weeds. The plants tend to reseed themselves generously, but if you have space for the flowers to spread, you may enjoy growing the bright red flowers.

Due to their long taproots, poppies don’t transplant well. The easiest method of growing red poppies is to simply plant the seeds directly into the soil. You can also grow red poppies in a deep container that can accommodate the roots.