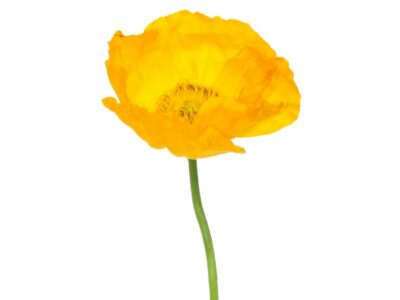 Iceland poppies, or Papaver nudicaule, are striking perennial plants whose paper-like flowers come in an array of colors including red, orange, yellow, white and pink. They are hardy down to zone 2.

If you don’t have the room to grow these plants in a flower bed, you can still grow Iceland poppy in a pot. Growing Iceland poppy as a houseplant isn’t really feasible, but you can easily grow them in pots outdoors. Indoor Iceland poppy culture is too difficult and not recommended.

Iceland Poppy in a Pot

There are several important things to know about Iceland poppy care in order to be successful.  You can easily grow these plants from seeds, but you’ll have to keep in mind that the seeds need light to germinate.

Sow directly into the pot that they’ll be growing in, as poppies despise being transplanted. If you need to start them in a pot other than where they’ll ultimately be growing, choose a biodegradable pot to sow the seeds in so that you can avoid transplant shock.

One trick to sowing Iceland poppy in a pot is to mix the seeds with sand. Poppy seeds are tiny, so by mixing them with sand, you’ll be able to see where the seeds were sown. After sowing, be sure to gently press the surface of the soil down so that the seeds have contact with the soil.  Keep the soil consistently moist and in a sunny location. Germination usually occurs within 3-4 weeks. Once germination occurs, be sure to water very gently since the root systems are delicate.

Be sure to give your Iceland poppies plenty of direct sunshine. They prefer a potting mix that’s rich in humus and must be well-drained. While actively growing and flowering, keep your plants fairly moist. After flowering is over, you can allow the soil to dry out a bit more in between watering.

You’ll need to fertilize your Iceland poppies in pots with a time-release fertilizer, or with a balanced liquid fertilizer. Once the plant has finished growing and blooming, don’t add any additional fertilizer. Consistency in watering and fertilizing throughout the growing season will go a long way in growing beautiful Iceland poppies.

Printer Friendly Version
Read more about Poppies
<Previous
Did you find this helpful? Share it with your friends!
FacebookTweetPinEmail
Related Articles
Newest Articles
You might also like…
Additional Help & Information