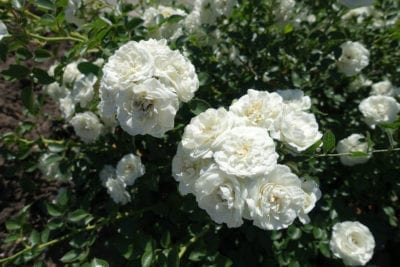 White roses are a popular hue for a bride to be, and with good reason. White roses have been a symbol of purity and innocence, historically sought after traits in ones betrothed.

When talking white rose varieties, the old ‘albas’ are really the only true types of white rose. All other white rose cultivars are actually variations of cream, but that doesn’t make them any less appealing when growing white roses.

Roses have been around for millions of years, with rose fossils having been found in 35-million-year-old rocks. During this lengthy period, roses have taken on a variety of meanings and symbolism.

In the 14th century, during the War of the Roses, both warring houses used roses as symbols in their struggle for control of England; one had a white and one had a red rose. After the war was over, the House of Tudor unveiled its new symbol, a red rose embedded with a white rose symbolizing the joining of the Houses of Lancaster and York.

As far as white rose varieties go, they are available as climbing, shrub, floribunda, hybrid tea, tree rose, and even groundcover types of white rose.

If you are growing white roses and want a traditional white rose variety, try growing Boule de Neige, which is French for snowball, an apt name indeed. Other old white rose cultivars include Mme. Hardy and Alba Maxima.

Looking to grow a climbing rose in white? Try the following:

Hybrid tea white rose types include Commonwealth Glory and Pristine. Poulsen is a floribunda rose with ruffled petals, as is Iceberg. Snowcap provides those with a smaller space the glories of a whiter rose in the form of a patio rose bush.