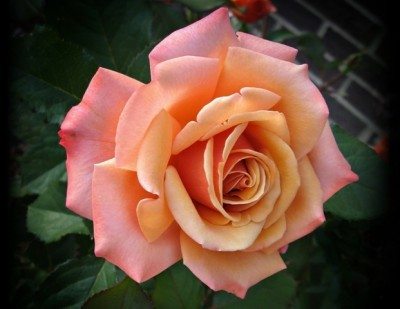 I came to love the smell of those catalogs over the years, nearly as much as the smiles I saw them bring to my mother and grandmother’s faces. Page after page of pictures of beautiful “bloom smiles” were featured in those catalogs. Bloom smiles is something I have come to call the blooms on all flowering plants, as I see their blooms as their smiles, gifts to us to help us through each moment of each day.

Jackson & Perkins was founded in 1872, by Charles Perkins, with the financial backing of his father-in-law, A.E. Jackson. At the time his small business was wholesaling strawberries and grape plants from a farm in Newark, N.Y. He also sold his plants to those local folks whom stopped by his farm. Every Jackson & Perkins plant sold was guaranteed to grow.

Jackson & Perkins began the selling of rose bushes before the turn of the century. However, it was many years before rose bushes became the company’s main item sold. In 1896 the company hired Mr. E. Alvin Miller, who had an interest in roses and tried hybridizing them. Mr. Miller’s climbing rose bush named Dorothy Perkins was marketed and became one of the most widely planted rose bushes in the world.

Jackson & Perkins roses became a strong and sought after name when shopping for rose bushes. The name always seemed to be attached to a rose bush that any rose lover could count on to do exceptionally well in their very own rose beds.

The Jackson & Perkins Company of today is, of course, not the same company it was then and the ownership has changed hands a few times. The rose catalogs have long ago ceased being rose scented but are still filled with beautiful pictures of their rose bushes bloom smiles. Dr. Keith Zary heads up the hybridizing and research staff that still work very hard at developing many beautiful rose bushes for our rose beds.

Some of the Jackson & Perkins rose bushes available for our rose beds and rose gardens today include: