Rose Hip Information – Learn When And How To Harvest Rose Hips 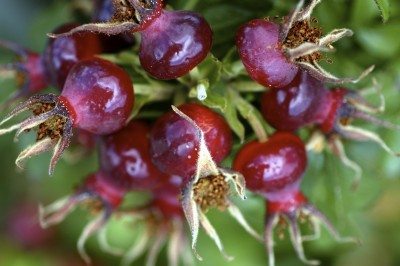 What are rose hips? Rose hips are sometimes called the fruit of the rose. They are precious fruit as well as containers for rose seeds that some rose bushes produce; however, most modern roses do not produce rose hips. So what can rose hips be used for? Keep reading for more rose hip information and learn how to harvest rose hips and take advantage of all they have to offer.

Rugosa roses are known to produce an abundance of rose hips, these wonderful roses can be grown for the multi-purpose of enjoying their beautiful blooms set against their wonderful foliage as well as using the hips they produce. The old-fashioned shrub roses also produce wonderful rose hips and offer the same enjoyment.

If the rose hips are left on the bush and never harvested, the birds will find them and peck out the seeds, eating these fine fruits as a great source of nourishment in the winter months and beyond. Bears and other animals love to find patches of wild roses and harvest the rose hips too, especially after just coming out of hibernation.

What Can Rose Hips Be Used For?

Wildlife aren’t the only ones benefiting from rose hips, as they are a great source of vitamin C for us too. In fact, it is said that three ripe rose hips have more vitamin C than one orange. Because of this, they are often used in recipes. Rose hips have a sweet, yet tangy, flavor and can be used dried, fresh or preserved for future use. Steeping them to make rose hip tea is a common way that rose hips are used, making not only a nicely flavored tea but also one with good vitamin C content. Some folks use rose hips to make jams, jellies, syrups and sauces. The sauces can be used for flavoring in other recipes or on their own.

Rose hips have been used to treat influenza, colds and other illnesses as a stomach tonic. They have also been used to make medicinal concoctions to help strengthen the heart and take away the shaking and trembling such conditions bring. It is not known of the success these old concoctions actually performed; however, they must have had some success at the time. For those of us whom have arthritis, it appears that rose hips may also have value in helping us with the pain it brings. The Arthritis Foundation had the following information posted on their website:

“Recent animal and in vitro studies have shown that rose hips have anti-inflammatory, disease-modifying and antioxidant properties, but results of human trials are preliminary. A 2008 meta-analysis of three clinical trials showed rose hips powder reduced hip, knee and wrist pain by about one-third in nearly 300 osteoarthritis patients and a 2013 trial found that conventional rose hips powder relieved joint pain almost as effectively as an enhanced version. In a 2010 trial of 89 patients, rose hips improved rheumatoid arthritis symptoms better than a placebo.”

When harvesting rose hips for the various uses, they are typically left on the bush until after the first frost, which causes them to turn a nice bright red and also makes them somewhat soft. Any remaining bloom is then trimmed off and the rose hip is pruned off the bush as closely as possible to the base of the swollen bulb-shaped hips.

Rose hips can be harvested when ripe for their seeds and placed in the refrigerator or other cold place to go through a cold moist period, called stratification. Once they have gone through this process, the seeds can be prepped and planted to hopefully grow a new rose bush. The rose that comes from the seeds may be too weak to survive or may be a nice specimen.

For use in making food items, the rose hips are cut in half with a sharp knife. The tiny hairs and seeds are removed, then rinsed under cold water. It is said that one should not use any aluminum pans or utensils on the rose hips during this preparation process, as the aluminum tends to destroy the vitamin C. The rose hips can then be dried by spreading out the prepared halves on a tray in single layers so that they dry well, or they may be placed in a dehydrator or oven on the lowest setting. To store the halves after this drying process, place them in a glass jar and keep them in a dark, cool place.

The possibility that nature holds the keys to helping us should come as no surprise, as there are many other published cases. Rose hips are truly a wonderful gift from the rose and Mother Nature.